'I believed a lie!' Disillusioned Trump voter confesses he won't vote for president again after wife is deported 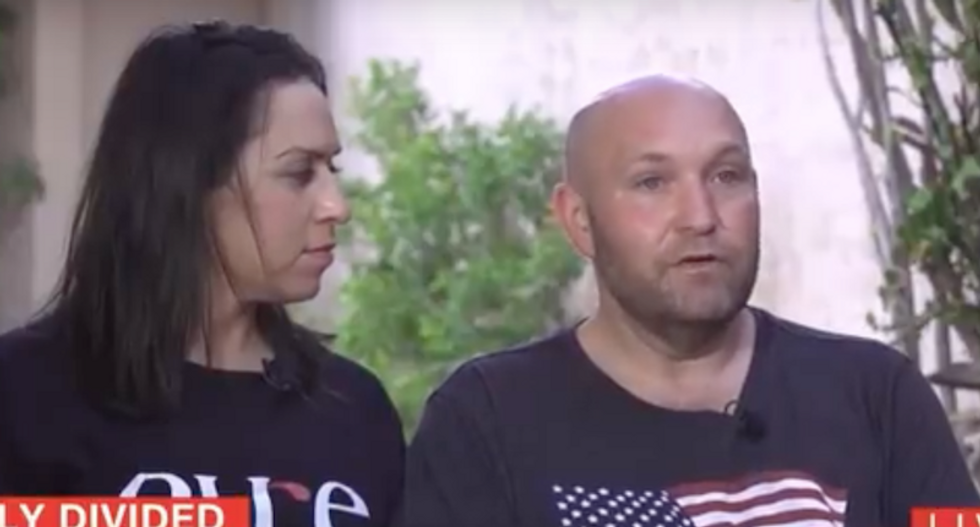 During the 2016 campaign, Jason Rochester's wife, Cecilia, was worried about Donald Trump. He wasn't.

She was undocumented. But Rochester reasoned that when President Trump railed against immigrant rapists and murderers, he was talking about hardened criminals, not his wife. She’d never even gotten a traffic ticket.

He tells Raw Story that he voted for Trump because he couldn't bring himself to vote for Hillary Clinton. He thought his family would be safe.

“I had to go with the fact that my wife would be fine because she was not a bad person. I was wrong. I believed a lie.”

A year after Trump was elected, he, his wife, and their son went to the ICE offices for her regular check-in. This was in November of 2017, and she was scared. They watched an older woman crying to her kids. It looked like she'd been given mere minutes before being carted off by ICE.

Cecelia didn't want to be dragged away in front of their son, so she volunteered to go back to Mexico and apply for legal entry. They figured coming back to the U.S. —legally—would take a year or two at most. What they didn't know was that she would not be eligible to reapply for a full ten years, and even then it's not certain if she'll succeed.

Now, she's in Mexico. She tries to talk to her child, who lives in Atlanta,  Georgia, with Rochester every morning over Skype.

“I would like a meeting with Trump. I want him to explain to my son why his Mommy can't ever come home,” Rochester says.

At the same time, he's not exactly ecstatic about his choices in the crowded Democratic primary. Disillusioned by both parties on the issue of immigration, he might sit 2020 out.

Randall Emery, President and co-founder of American Families United, tells Raw Story that the Democratic candidates looking to challenge Trump in 2020 are missing an opportunity when they fail to prioritize family reunification.

"There are a lot of separated families, including military families," Emery says. And they make up a sizable voting bloc. "There are people who voted for Trump, but would be happy to vote for whoever will help their families," Emery observes.

Rochester voted for Obama in 2008, but sat out the 2012 election after his wife wasn't eligible to get papers following the former president's first term.

Rochester is fighting hard to get his wife home. He's helping spearhead a petition urging the Senate to add U.S. citizens' rights to immigration reform.

"It is our right as Americans to marry for love without being forced to choose between marriage and our country," the petition reads.

According to American Families United, over a million US citizens' spouses are inadmissible.