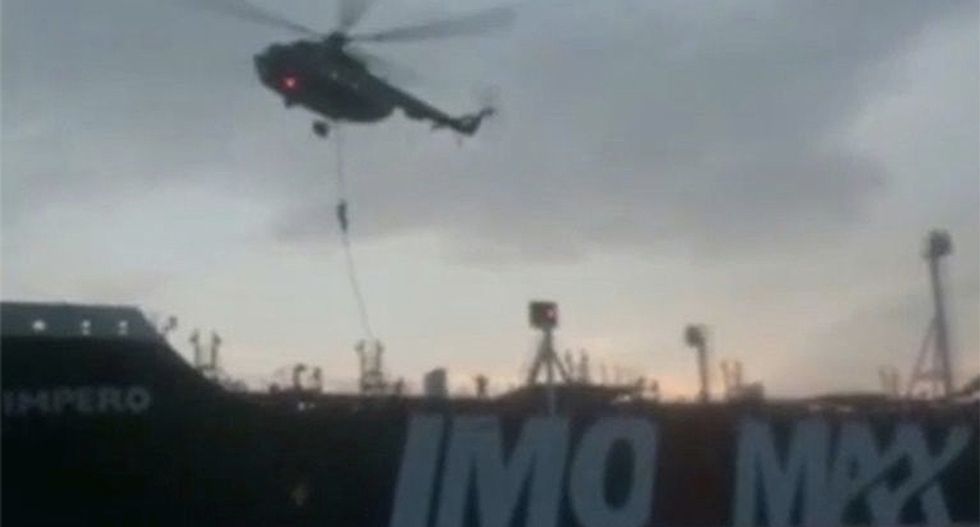 ran warned Sunday that the fate of a UK-flagged tanker it seized in the Gulf depends on an investigation, as Britain prepared for an emergency security meeting on Tehran's action.

Iranian authorities impounded the Stena Impero with 23 crew members aboard off the port of Bandar Abbas after the Islamic Revolutionary Guard Corps seized it Friday in the highly sensitive Strait of Hormuz.

Video footage released by Iran showed the Stena Impero tanker being surrounded by speedboats before troops in balaclavas descend a rope from a helicopter onto the vessel.

In an audio recording of a radio exchange, an Iranian officer can be heard ordering the tanker to change course "immediately".

The British frigate HMS Montrose intervenes to inform the Stena its "passage must not be impaired, impeded, obstructed or hampered" under international law.

The Iranians then tell the British warship: "No challenge is intended... I want to inspect the ship for security reason."

The authenticity of the recording, obtained and released by London-based maritime security risk analysts Dryad Global, was confirmed by Britain's defence ministry.

London has warned its ships to avoid the Strait of Hormuz, a chokepoint for about a third of the world's sea-borne oil.

Tensions in the Gulf have escalated since May this year, when the US boosted its military presence in the region in response to what it called indications of a "credible threat" by Iranian regime forces.

Prime Minister Theresa May will hold a meeting of Britain's emergencies committee on Monday to discuss the seizure. The cabinet briefings usually include ministers, security, intelligence and military chiefs at a secure London facility.

UK Foreign Secretary Jeremy Hunt on Sunday also spoke to his French and German counterparts who agreed safe passage for vessels through the Strait was a priority for European nations.

"IRGC forces manage to lead tanker to Iran shores despite UK warship's interference," said a news ticker on the channel.

Iran opened the probe after detaining the ship on allegations it failed to respond to distress calls and turned off its transponder after hitting a fishing boat.

Its crew is made up of 18 Indians, including the captain, three Russians, a Latvian and a Filipino.

"All of them are in full health... anchored in a safe place," said Allah-Morad Afifipoor, of the Hormozgan province port and maritime authority.

The ship's owner said it had asked Iranian authorities for permission to visit the crew, and was waiting for a response.

Latvia's foreign ministry said because it has no embassy in Iran, it had asked the Finnish embassy to help the detained Latvian first mate. It said so far Iranian officials had denied requests for contact.

A top British representative to the United Nations rejected Iran's version of events, accusing Tehran of "illegal interference" and saying there was no evidence of a collision.

In a letter to the UN Security Council, British charge d'affaires Jonathan Allen wrote that the vessel had been in Omani waters with its transponder switched on when it was approached.

It was "exercising the lawful right of transit passage in an international strait", he wrote.

Tehran has been at loggerheads with Washington since May 2018, when President Donald Trump unilaterally withdrew the US from a landmark 2015 deal putting curbs on Iran's nuclear programme in exchange for sanctions relief.

The US administration reimposed tough sanctions on Iran, which retaliated by increasing its enrichment of uranium beyond limits set in the nuclear accord.

Trump called off air strikes against Iran at the last minute in June after the Islamic republic downed a US drone, one of a string of incidents including attacks on tankers in the Gulf.

Britain summoned Iran's charge d'affaires on Saturday and urged his country to de-escalate tensions and release the tanker.

Hunt said the seizure showed "worrying signs Iran may be choosing a dangerous path of illegal and destabilising behaviour".

The incident began hours after a Gibraltar court extended by 30 days the detention of an Iranian tanker seized by UK authorities two weeks ago on allegations of breaching sanctions against Syria.

Foreign Minister Mohammad Javad Zarif tweeted that Trump's national security adviser John Bolton "is turning his venom against the UK in hopes of dragging it into a quagmire".

Nearby Oman, which maintains strong ties with Iran, joined calls for the release of the Stena Impero and urged London and Tehran to resolve the dispute.

Separately, Iran said one of its tankers held in its regional rival Saudi Arabia since being forced to seek repairs in the kingdom is returning home.