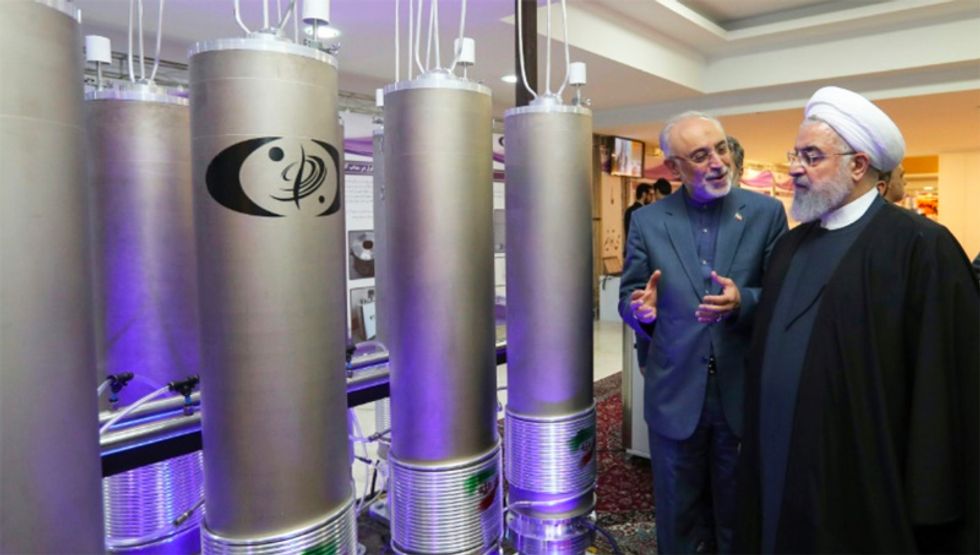 Iran said Sunday it was set to breach the uranium enrichment cap set by an endangered nuclear deal within hours as it seeks to press signatories into keeping their side of the bargain.

The Islamic republic also threatened to abandon more commitments unless a solution is found with parties to the landmark 2015 agreement.

The move to start enriching uranium above the agreed maximum purification level of 3.67 percent comes despite opposition from the European Union and the United States, which has quit the deal.

Rouhani initially flagged Tehran's intentions on May 8, exactly a year on from US President Donald Trump unilaterally abandoning the multilateral deal.

He has said the move is in response to a failure by remaining parties to keep their promise to help Iran work around biting sanctions reimposed by the US in the second half of last year.

The arch-rivals have been locked in an escalating war of words with Washington blaming Iran for a series of attacks on tanker ships and Tehran shooting down an American surveillance drone, raising fears of a conflict that both sides have said they want to avoid.

Deputy Foreign Minister Abbas Araghchi on Sunday singled out Iran's declining oil sales and the effect of financial sanctions as the main issues that needed to be solved, or Tehran would further step back from its nuclear commitments.

"We hope we can reach a solution otherwise after 60 days we will take the third step as well," he said, adding that Tehran would give further details at an "opportune moment".

Iran has previously threatened to also resume building as of July 7 a heavy water reactor -- capable of one day producing plutonium -- in Arak in central Iran, a project that had been mothballed under the agreement.

However since Iran delivered its ultimatum on the Arak reactor "good technical progress" had been made with parties to the deal on modernising the reactor, convincing Iran to postpone its decision, Araghchi said.

He added that Iran still wanted the deal to stay alive and there was time for Tehran to reverse the steps it has taken since May to scale down its commitments if its demands are met by the other parties.

The 2015 deal was reached between Iran and six world powers -- Britain, China, France, Germany, the United States and Russia -- and saw Tehran agree to drastically scale down its nuclear programme in exchange for sanctions relief.

Washington began reimposing sanctions in August 2018 and has targeted crucial sectors including oil exports and the banking system, fuelling a deep recession.

It is not yet clear how far the Islamic republic will boost enrichment.

But a top advisor to Iran's Supreme Leader Ayatollah Ali Khamenei hinted on Friday it could reach five percent.

Kamalvandi said Sunday that Iran's Atomic Energy Organisation was fully ready to enrich uranium "at any amount and at any level" if ordered to do so.

The 3.67 percent enrichment limit set in the agreement is sufficient for power generation but far below the more than 90 percent level required for a nuclear warhead.

Iran says that it is not violating the deal, citing terms of the agreement allowing one side to temporarily abandon some of commitments if it deems the other side is not respecting its part of the accord.

The diplomatic chiefs of Britain, France, Germany and the EU have said they are "extremely concerned" by Iran's decision to breach some of its commitments.

Trump, meanwhile, has warned Iran that it is "playing with fire".

French President Emmanuel Macron told Rouhani of his "strong concern" over the risk of weakening the nuclear agreement during a telephone call Saturday, according to a statement from the Elysee Palace.

However, Macron pledged to "explore by July 15 the conditions for a resumption of dialogue between all parties", the statement said.

Iran says it exercised "strategic patience" for a year after the US withdrawal, waiting for the other signatories to make good on promised economic benefits.

But on May 8, Tehran announced it would no longer respect two key limits -- a 1.3-ton maximum for heavy water reserves and a cap of 300 kilogrammes on its low-enriched uranium stockpile.

The International Atomic Energy Agency has in recent days confirmed that Iran has breached the limit of 300 kilogrammes and has scheduled a special meeting on Iran's nuclear programme for July 10.

The UN nuclear watchdog said Sunday it was aware of Iran's latest announcement.

"IAEA inspectors in Iran will report to our headquarters as soon as they verify the announced development," a spokesman for the Vienna-based agency said.

Multiple news outlets revealed Friday that Apple notified at least 11 U.S. State Department officials that their iPhones were recently hacked by an unknown party or parties with spyware developed by the private Israeli firm NSO Group.

"A multi-agency investigation is immediately needed."