Iraq exhumes bodies thought to be Kurds killed by Saddam 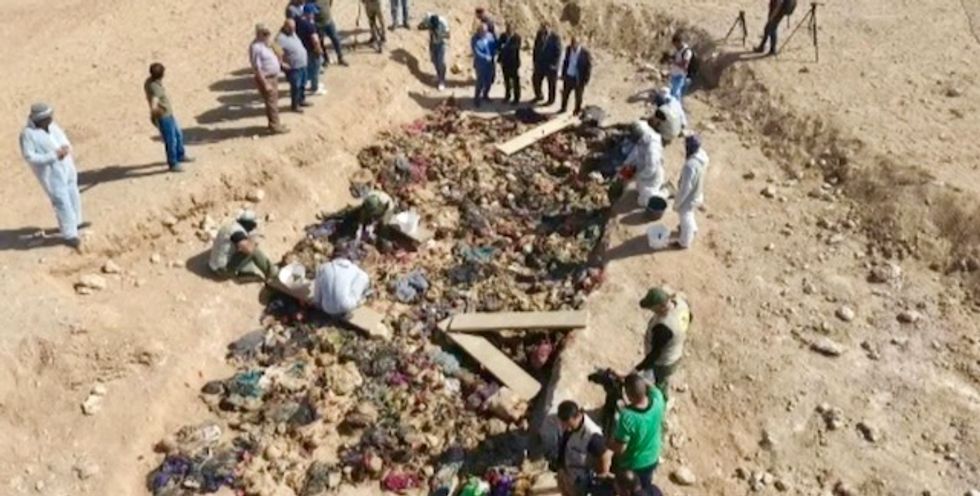 This aerial view taken by a drone on July 23, 2019 shows the site of a mass grave holding the remains of dozens of victims, including children, likely killed during Iraqi ex-dictator Saddam Hussein's campaign against the country's Kurds AFP

Iraq on Tuesday began exhuming the remains of dozens of victims, including children, likely killed during ex-dictator Saddam Hussein's campaign against the country's Kurds, a forensics official told AFP.

The mass grave was uncovered in Tal al-Sheikhiya, about 300 kilometres (200 miles) south of Baghdad, said Zaid al-Youssef, the head of Baghdad's Medico-Legal Directorate which is tasked with identifying the remains.

"More than 70 bodies including women and children, ranging from newborns to 10 years old" have so far been exhumed, Youssef said.

Those remains were recovered from the surface layer of the site, he said, but "there could be a second deeper layer" with additional bodies.

"The evidence collected indicates they were summarily executed in 1988," said Youssef, which coincides with Saddam's brutal "Anfal" campaign against Iraq's Kurds.

"The female victims were blindfolded and killed by gunshots to the head, but also have traces on various parts of their bodies of bullets that were fired randomly," Youssef said.

The grave lies in the southern province of Mutahanna, also home to the notorious Nigrat Salman prison camp.

Many Kurds and political opponents of the previous regime were held there, and survivors shared tales of humiliation, rape and detention of minors as part of Saddam's 2006 trial.

Iraq has been hit by wave after wave of conflict in recent decades, culminating in the fight against the Islamic State group which ended in late 2017.

Those years of conflict left grave sites all across the country where the remains of thousands of victims from Iraq's diverse ethnic and religious communities have been uncovered.

IS alone left behind an estimated 200 mass graves that could hold up to 12,000 bodies, the United Nations has said.

Authorities are testing remains from the most recent conflict as well as wars dating back three decades in an effort to identify the fates of missing Iraqis.

According to Iraqi authorities, Saddam's regime forcefully disappeared more than one million people in the 1980s and 1990s, and many of their families are still trying to find out what happened to them.