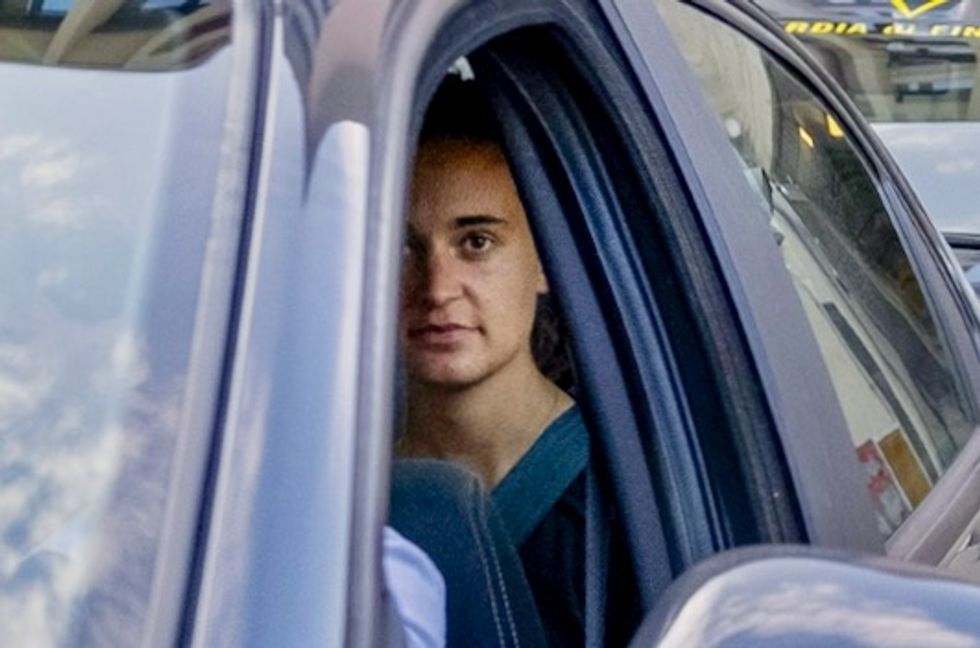 An Italian judge has found a security decree is "not applicable" in the case of rescues, meaning Sea Watch skipper Carola Rackete is free to go AFP/File / Giovanni ISOLINO

An Italian judge said Tuesday that Sea-Watch 3 captain Carola Rackete was free to go, three days after her arrest for docking with 40 migrants aboard her rescue ship in defiance of an Italian ban.

Rackete was arrested after hitting a police speedboat while entering the port of the southern island of Lampedusa on Saturday in her vessel, which had been banned from docking by Italian authorities.

The move ended a two-week stand-off at sea.

The judge said an Italian security decree was "not applicable in the case of rescues" in the ruling.

"I was relieved about the judge's decision, which I see as a big win for solidarity with all people on the move including refugees, migrants and asylum seekers, and against the criminalization of helpers in many countries across Europe," Rackete said in a statement from Sea-Watch.

"I was very touched by the solidarity expressed to me by so many people," the German said, and paid tribute to the crew.

"Even though the attention is on me, it was as a team that we rescued the people, took care of them and brought them to safety."

"This poor woman has only tried to kill five Italian soldiers. I am speechless! What do you have to do to be sent to prison in Italy?" Salvini said in a video on Facebook, promising to expel this "danger to national security" as soon as possible.

However his decision must first be cleared by the court.

Rackete, 31, has defended her actions, saying she was compelled to avert a human tragedy and bring the migrants ashore after more than two weeks at sea.

"It wasn't an act of violence, but only one of disobedience," Rackete told the Italian daily Corriere della Sera in an interview published Sunday.

She had faced charges of abetting illegal immigration and forcing her way past a police vessel that tried to block the Sea-Watch 3 -- the latter crime punishable by up to 10 years in jail.

Sea-Watch said the judge considered she had acted "in the performance of a duty", to save lives at sea, and had no choice but to come to Italy as Libya and Tunisia could not be considered safe ports.

Rackete is also separately being investigated for assisting with illegal immigration, as is often the case when an NGO ship unloads migrants in Italy.

The case is due to be heard on July 9, and according to her lawyers she is unlikely to be deported before then.

The case has ignited a diplomatic row between Rome and Berlin amid a continuing failure to coordinate migration policy within the European Union.

German Foreign Minister Heiko Maas on Monday called for Rackete's release following judicial proceedings "based on the rule of law".

Salvini responded that Maas should "invite his fellow citizens not to break Italian laws".

The migrants were allowed to disembark at Lampedusa and taken to a reception centre as they prepared to travel to either France, where the interior ministry said it would take in 10, or to Germany, Finland, Luxembourg or Portugal.

Two other humanitarian rescue ships, the Open Arms and the Alan Kurdi, remain at sea.

Salvini said he held another meeting at his ministry on Tuesday to discuss how to prevent them from bringing migrants to Italy.

"We will continue to stop them, one by one. We will find a judge, there will be one in Italy, who will finally have the courage to say ... these people are not rescuers, they are accomplices, potential murderers, criminals, and in a normal country criminals go to jail," he thundered.