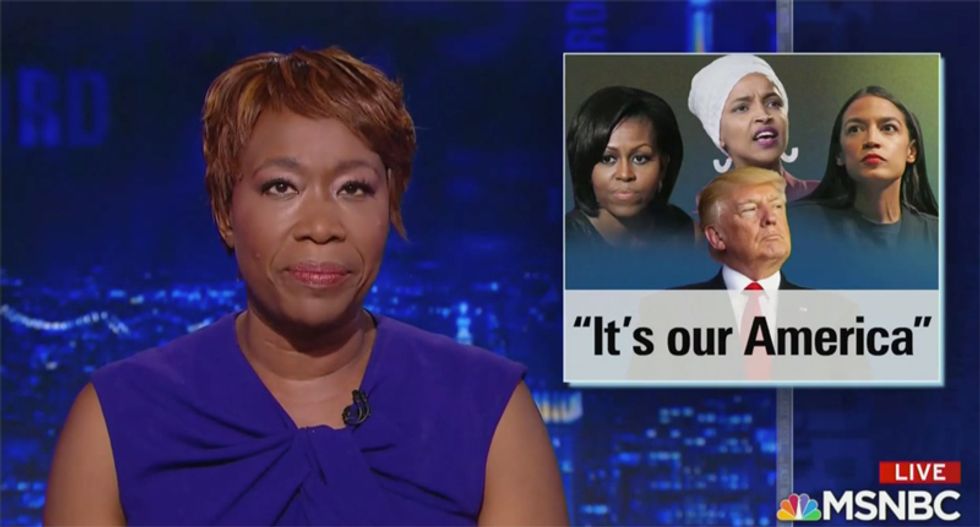 "That didn’t last long. Having read the talking points crammed into his hands by nervous Republicans for almost an entire day, Donald Trump pulled a full Charlottesville, praising his supporters who chanted 'Send Her Back' to attack Rep. Ilhan Omar (D-MN) at his North Carolina campaign rally as 'incredible patriots,'" Reid reported.

"Yep, 24-hours-ago, Trump -- per those nervous Republican talking points -- claimed that he disapproved of the racist chant about congresswoman Omar and even tried to stop it," she said. "He got nice headlines that claiming he was disavowing the chant from some of the news media who indulged in the false balance tick of pretending whatever the president said is true and it’s a given fact."

The host played a Saturday clip of Trump speaking of his supporters who shouted the racist chant.

"Donald Trump didn’t even stop doing the underlying thing and kept on fanning the flames that, to be clear, put her in danger, by continuing to attack Congresswoman Omar," Reid explained.

She noted how Trump's worldview received a rare rebuke from Michelle Obama.

What truly makes our country great is its diversity. I’ve seen that beauty in so many ways over the years. Whether… https://t.co/2eP8AkQDLg
— Michelle Obama (@Michelle Obama) 1563565603.0

"The world is watching," Reid noted. "And today, it is the United States of America -- the former beacon of the free world -- that is the subject of global revulsion and disgust because of the raw ugly racism and ethno-nationalism of our president."

"As for the congresswoman at the center of Donald Trump’s racist attacks, they are showing the strength and resilience that actually is what this country is supposed to be about and refusing to back down in the face of Trump’s ugliness," Reid said, introducing a clip of Rep. Alexandria Ocasio-Cortez (D-NY).