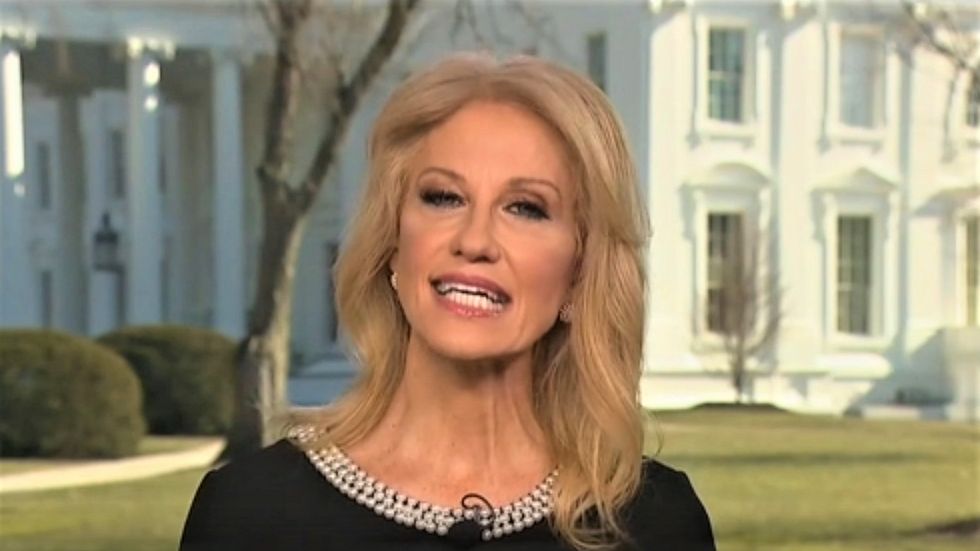 On Tuesday, counselor to the president Kellyanne Conway appeared on "Fox & Friends" and railed against federal courts for blocking President Donald Trump from changing the 2020 Census to interrogate people about citizenship — a move documents suggested was done to deliberately intimidate respondents into an undercount and deny representation and funding to minority areas.

"Why can't we just ask the question the way it was asked for 50 years before the Obama administration yanked it out of there?" said Conway. "The American Community Survey every fifth year asks a similar question. And think of all the questions that nobody complains are included in our U.S. Census every 10 years that include a far, far, far smaller number of Americans or, I would argue, are much more intrusive, invasive and expansive. We're asking people how many toilets in your house, and you don't want to know who's using them? It's absolutely ridiculous, and this is why the president is fighting for its inclusion."

Salvador Rizzo of the Washington Post Fact Checker swatted down Conway's argument about toilets as "flushable."

For a start, he noted, President Barack Obama had nothing to do with axing the citizenship question, which hasn't been asked since on any short-form census since 1950 (or needed to be asked, since we can get all that same information even more accurately with administrative records matching.)

The American Community Survey, which goes out every year and not every five years, does indeed ask about citizenship, as Conway says, but it's a much smaller survey that only goes to 3.5 million households and isn't used for block-by-block population data.

As for Conway's argument that the census asks how many toilets are in your house, that's not true either. From 1960 to 2000, the census sent a "long form supplement" to one in six households, and one of those questions was whether their house had "complete plumbing facilities" (defined as hot and cold piped water, at least one flush toilet, and at least one bath or shower). The ACS also used to include a question about toilets, but it was cut in an effort to make the survey less intrusive. At no point did the census itself contain such a question.