Lara Trump snarls at critics of 'send her back' for pushing a 'biased, racially-charged narrative' 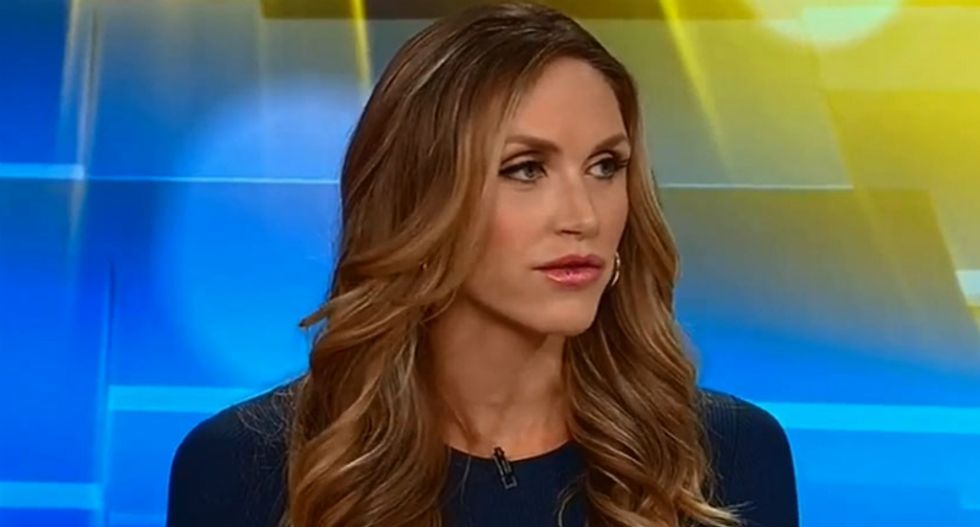 Lara Trump, the wife of President Donald Trump's son Eric, has accused CNN anchor Anderson Cooper of pushing a "biased, racially-charged narrative" after he criticized her recent defense of the Trump administration over the "send her back" scandal.

"Anyone insinuating that there was some premeditated plan to orchestrate the “send her back” chant is obviously desperate to continue pushing a biased, racially-charged narrative. #FakeNews," Trump posted to her Twitter account on Saturday. She included a link to the Washington Examiner, a right-leaning newspaper which included a quote from Cooper blasting Trump for supposedly "lying" about her role in whipping up a crowd to chant "send her back" about Rep. Ilhan Omar, D-Minn.

"It continues with his daughter-in-law Lara Trump, who was on TV this morning lying in a way that even contradicts what the president lied about yesterday. A couple people. He didn’t say it. I mean, I wouldn’t even normally bring in the daughter in law of the president, but she’s putting herself out there. She has a role in the campaign, and she’s just friggin' lying," Cooper was quoted as saying in the article. Cooper had previously shown a clip of Trump telling a crowd, "If you don’t love our country, the president said it, ‘You can leave.’ Right?" This was after she had told Fox Business Network that "it wasn’t the whole crowd, it was just a couple of people right there in the front, but [the president] didn’t say it." She had also insisted that the crowd began its chant against Omar without any prompting.

Lara Trump has been an outspoken supporter of her father-in-law's administration, most recently writing an editorial for Breitbart claiming that Trump has helped women (she retweeted her husband's promotion of it earlier in the week). In it she argued that "there is a clear difference between the Democrat Party and President Donald Trump — Democrats promise to improve the lives of women, but Trump actually does it."

She added, "For more than two and a half years, my father-in-law has been implementing pro-growth policies that have made America more prosperous than ever before — and women have benefitted as much as anybody."

President Trump aroused controversy last week when he posted a series of tweets about Reps. Alexandria Ocasio-Cortez of New York, Ilhan Omar of Minnesota, Rashida Tlaib of Michigan and Ayanna Pressley of Massachusetts urging them to "go back" to their supposed countries of origin.

"So interesting to see 'Progressive' Democrat Congresswomen, who originally came from countries whose governments are a complete and total catastrophe, the worst, most corrupt and inept anywhere in the world (if they even have a functioning government at all), now loudly and viciously telling the people of the United States, the greatest and most powerful Nation on earth, how our government is to be run," Trump wrote in a series of three tweets. "Why don’t they go back and help fix the totally broken and crime infested places from which they came. Then come back and show us how it is done. These places need your help badly, you can’t leave fast enough. I’m sure that Nancy Pelosi would be very happy to quickly work out free travel arrangements!"

Later that week a group of Trump supporters chanted "send her back" about Omar at one of the president's rallies, an act that the president tacitly encouraged by remaining silent while it happened.