Trump’s bizarre tweet about alcohol is raising many new questions 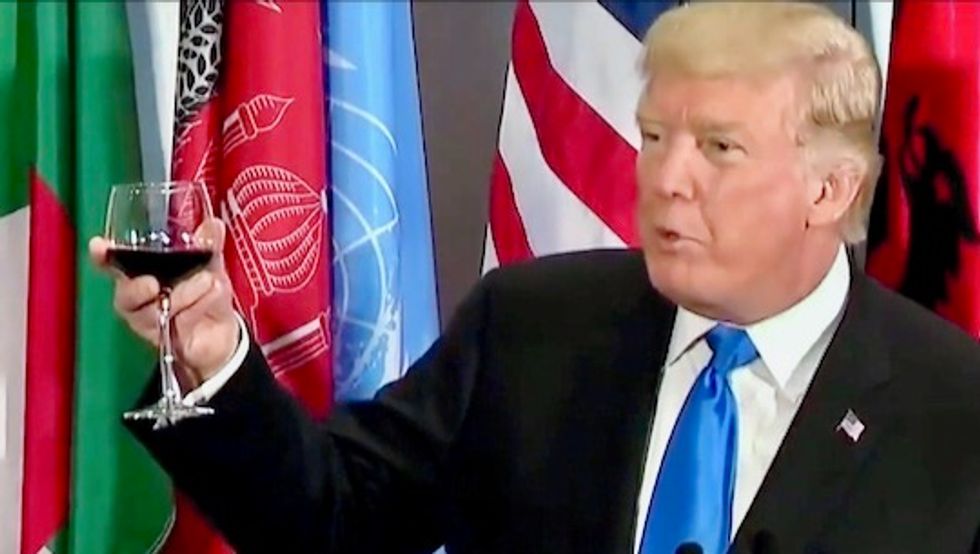 ‘What a Lousy Conman’

“I never had a glass of alcohol,” President Donald Trump said at a press conference in 2018. It’s a claim that he’s made many times before that’s as much a part of his persona as are his golfing and incessant tweeting. In 2017 Trump made a toast at a UN dinner (photo), and drank “maroon liquid” from the glass. The White House would not respond to questions, according to reports.

Earlier this month Vice News reported on Trump’s claim he doesn’t drink and never has. In a lengthy exposé, the news media outlet interviewed people who say teetotaling Trump is a myth.

“I served him. And he drank at the bar. He’d come in with John Casablancas. He’d go to the side of the bar [at Spy] by the waitress station, because he liked the waitresses. He would order light beer. It was usually Miller Lite or Bud Light,” the bartender, named Laraby, told Vice. “If they could get some large-breasted beautiful young European girl’s attention, they would get a nice bottle of wine, sometimes champagne, and move to a table. He drank his beer out of the bottle. He would nurse his beer. Even if they were there for hours, he would have three beers at the most.”

Laraby was one of nine people who described Trump’s drinking.

And now, many are questioning Trump’s claim he never drinks and never has.

In an angry tweet Trump attacked France for taxing U.S. companies. At the end of his screed he threatened President Emmanuel Macron, saying he will impose taxes on French wine.

White House reporter for the L.A. Times, Eli Stokols, was among the first to remind Americans that “Trump does not drink.”

He wasn’t the only one who picked up on Trump’s apparent slip.

Trump is very famously a teetotaler, who says he's never had alcohol. Ever. Yet he's apparently got a very strong… https://t.co/OnfN7MqGSY
— Russ Zimmer (@Russ Zimmer)1564159189.0

France just put a digital tax on our great American technology companies. If anybody taxes them, it should be their… https://t.co/WIpeHmUp1A
— Donald J. Trump (@Donald J. Trump)1564158762.0

Bragging about the quality of American wine is a strange move for a president that doesn't drink. https://t.co/pATHtzKkbj
— Chris Megerian (@Chris Megerian)1564159086.0

China defended its handling of the coronavirus pandemic Tuesday but said it would "strive to do better" after independent experts criticised the speed of its response to a virus that has now killed more than two million people worldwide.

Beijing has faced international criticism for an alleged lack of transparency after the virus emerged in the central city of Wuhan in late 2019 and for stifling whistleblowers who tried to raise the alarm.

Documentary filmmaker Ken Burns is alarmed by the exposure of democracy's fragility, but he has plenty of reasons for optimism.

The filmmaker has documented three major crises in U.S. history -- the Civil War, the Depression and World War II -- and he believes Americans may be living through a fourth, and worst, historic crisis, reported NPR.

An estimated 12 percent of people in England had been infected with coronavirus by December last year, up from nine percent in November, according to official antibody data released Tuesday.

One in 10 people in Wales, one in 13 in Northern Ireland and one in 11 in Scotland were also estimated to have caught the virus, according analysis of random blood test results published by the Office for National Statistics (ONS).

Kremlin dismisses calls to free Navalny -- and warns against protests