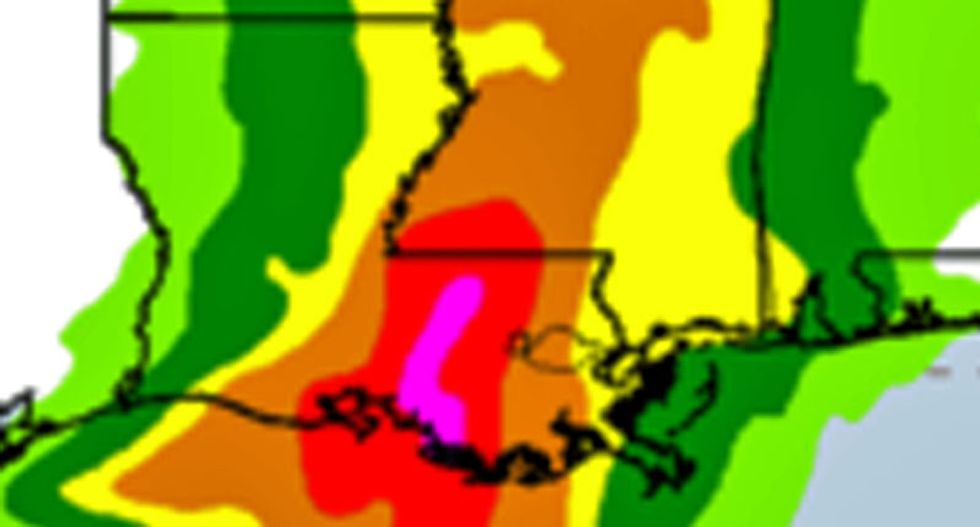 Millions of residents in Louisiana on Friday braced for impact from Tropical Storm Barry, which is threatening the southern US state and its largest city New Orleans with potentially disastrous rainfall and flooding.

The large storm system currently in the Gulf of Mexico brings heavy rains and potential storm surge and flooding that pose a threat reminiscent of 2005's deadly Hurricane Katrina.

Thousands packed up and left their homes as flooding hit low-lying areas like Plaquemines Parish, where road closures left some communities isolated as they braced for Barry's arrival.

By late Friday the storm was packing winds of 65 miles (100 kilometers) per hour, nine mph shy of hurricane strength.

Dozens took shelter in Plaquemines's Belle Chasse auditorium, while others headed inland to stay with friends or relatives and avoid what the NHC called "life-threatening flooding" to coastal and river areas.

Governor John Bel Edwards said New Orleans was well prepared to withstand the storm, but urged vigilance by residents there and across the state, as authorities called on people to stay off the streets.

"No one should take this storm lightly, and I urge everyone to remain informed," Edwards said on Twitter.

With Barry threatening massive rainfall across several states including Louisiana, Mississippi, Alabama, Arkansas and Tennessee, states of emergency were being declared to help free up federal resources to address the storm.

"We could be looking at widespread major flooding across several river basins," the NHC said.

Some Plaquemines residents were battening down to ride out the storm, despite mandatory evacuation orders.

"We've stayed for some pretty strong storms and we shouldn't have," said Keith Delahoussaye, a 60-year-old mechanic, at his trailer home in Port Sulphur.

But he was keeping a close eye on the level of the Mississippi River nearby. "If we see the water rising here, we'll leave."

"I'd say they fear it every time," said Brown, 58, who survived Katrina and was staying behind to look after the medical center. He said "it would be devastating" if the river breached the levee.

The level of the Mississippi River, already swollen from historic rains and flooding upstream, was at 16 feet (4.9 meters) in New Orleans, one foot shy of flood stage.

With storm surges of three to six feet projected, and 10 to 20 inches of rain forecast, the river could breach the 20-foot-high levee system protecting the city of 400,000.

"Much of the Gulf coast, especially Louisiana, are already at extremely high water levels and so the heavy rains and any potential storm surge will lead to dangerous flash flooding," Jill Trepanier, an expert at Louisiana State University, said in a statement.

Mike Yenni, president of Jefferson Parish near New Orleans, said the community has taken the "unprecedented" step of closing hundreds of flood gates, largely due to near-historic high levels of the Mississippi River.

Authorities closed highways in several locations along the coast as flood waters began creeping in.

In St. John's Parish next to New Orleans, some communities were under two or more feet of water, local television footage showed.

Residents and business owners in New Orleans were laying down sand bags and boarding up windows. City officials have set up shelters for residents.

The city's main sports arena, the Superdome, was turned into an emergency shelter during Katrina, and the facility was due to host a concert by the Rolling Stones on Sunday, but it was postponed by a day due to Barry.