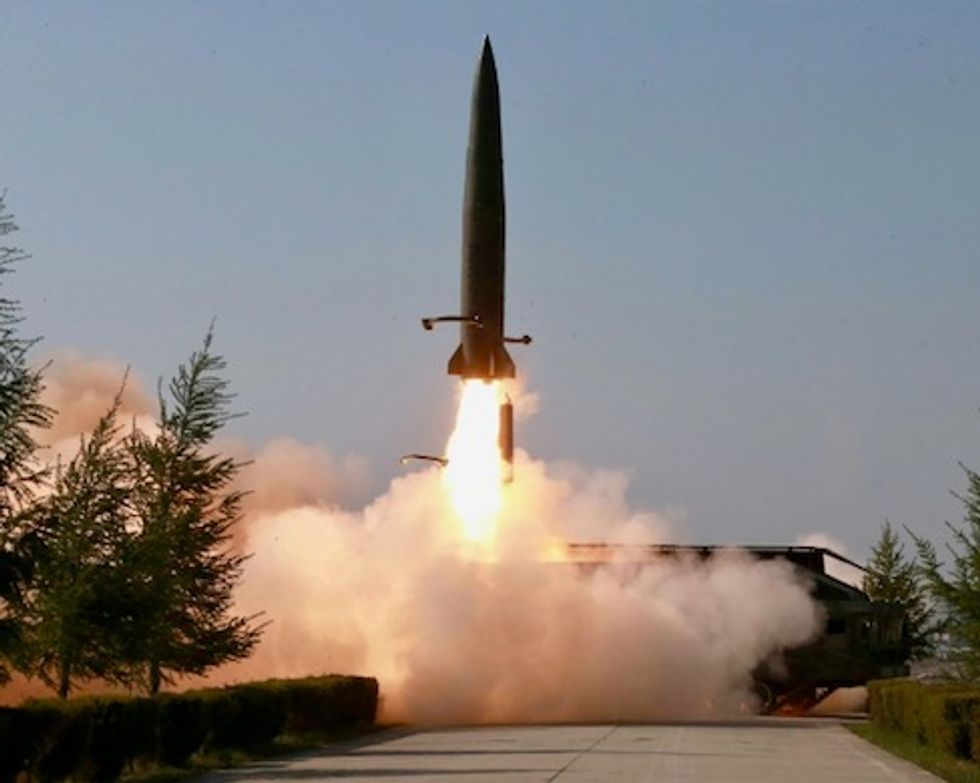 With its latest missile launches, North Korea has raised the pressure over the future of deadlocked nuclear talks with the United States KCNA VIA KNS/AFP / KCNA VIA KNS

It was Pyongyang's first missile test since an impromptu meeting between US President Donald Trump and North Korean leader Kim Jong Un last month that produced an agreement to resume a working-level denuclearization dialogue.

But those talks have yet to begin, and North Korea warned recently they could be derailed by Washington and Seoul's refusal to scrap military exercises scheduled for next month.

South Korea's Joint Chiefs of Staff (JCS) said the two missiles were launched just after dawn from Wonsan on the east coast.

One flew more than 430 kilometers (270 miles), while the other travelled 690 kilometers and appeared to be a "new type of missile", according to an official in Seoul.

"We urge the North to stop actions that do not help ease military tensions," said Choi Hyun-soo, a defense ministry spokeswoman for South Korea.

Japan's defense minister called the launches "extremely regrettable" but stressed that the missiles had fallen short of his country's exclusive economic zone.

Pyongyang carried out similar short-range launches in May, which Trump dismissed at the time as "very standard stuff" that would have no impact on his relationship with Kim.

The two leaders went on to hold an unscheduled meeting June 30 in the Demilitarized Zone that divides the two Koreas, where they agreed to pick up a nuclear dialogue that stalled after the collapse of the second Trump-Kim summit in February.

US Secretary of State Mike Pompeo said the working-level disarmament talks would probably start in mid-July, but last week Pyongyang said they had been jeopardized by the scheduled joint military drills.

Condemning the exercises as "blatant pressure", Pyongyang even hinted it could reconsider its moratorium on nuclear and long-range missile testing.

The latest missile tests were a "strong message" that should be seen as "part of Pyongyang's protest" against the military drills, said Cheong Seong-chang, an analyst at the Sejong Institute.

There are close to 30,000 US troops stationed in South Korea, and their annual maneuvers with tens of thousands of South Korean soldiers have always infuriated Pyongyang, which views them as provocative rehearsals for invasion.

Other analysts said opposition to the drills was merely a pretext for Pyongyang to pursue its weapons ambitions.

"I think today's launches are part of a larger plan for North Korea's advanced missile program, rather than its protest against the upcoming military drill," said Hong Min, a senior researcher at the South's state-run Korea Institute for National Unification.

"The current bargain is: don't test nuclear warheads or long range missiles and the United States won't object or seriously try to stop it," tweeted Adam Mount of the Federation of American Scientists.

At their first summit in Singapore in June 2018, Trump and Kim adopted a vaguely worded statement on "complete denuclearization of the Korean peninsula".

AFP / Brendan Smialowski The failure to reach an agreement over relief from US sanctions, and what the North was willing to give in return, led to the collapse of the leaders' second summit in Hanoi

But the failure to reach an agreement over relief from US sanctions, and what the North was willing to give in return, led to the collapse of their next summit in Hanoi.

Trump has repeatedly insisted that his personal relationship with Kim is strong enough to keep a dialogue with North Korea on track in the face of provocations like short-range missile launches.

Asked on Tuesday whether any meetings were scheduled, Trump said: "No, we just have a very good relationship. And probably they would like to meet and we'll see what happens."