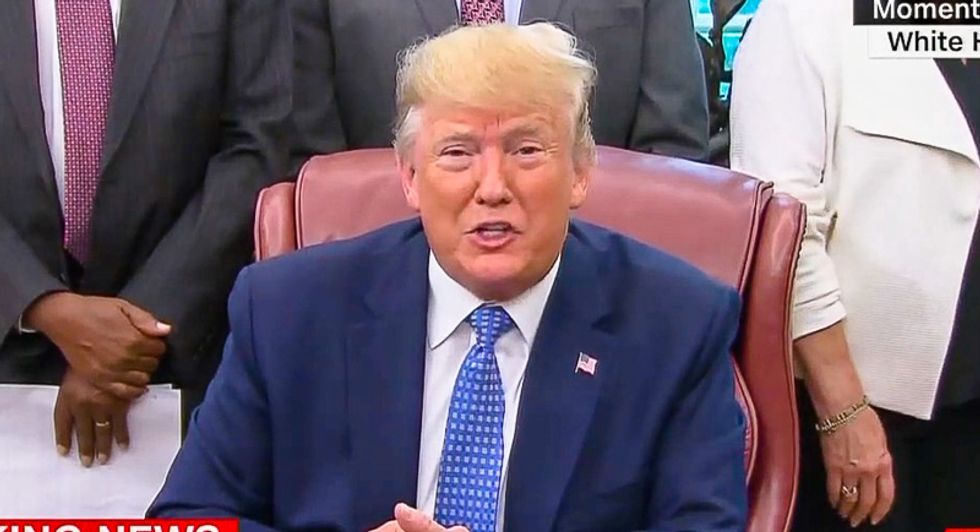 President Donald Trump had a chaotic day, from holding a summit with far-right online activists, to announcing executive action to gather citizenship data in place of the rejected census question, to letting his administration release information on upcoming immigration raids.

There is a method to the madness, argued New York Times editor Patrick Healy on CNN's "OutFront."

"I want to start with the big picture here," said host Erin Burnett. "You have this social media summit, right, that is — was extremists. You have the immigration raids, which obviously if you're really raiding and targeting you wouldn't announce. An executive order to collect citizenship data. All of this coming days before Mueller's big testimony. And we certainly don't know everything he is going to say but the bottom line is he couldn't exonerate the president. Coincidence that all this is happening now?"

"Not a coincidence at all — this is classic Trump political playbook," said Healy. "His two big strategies, that he saw as what won him the presidency in 2016 was targeting immigrants and sowing division."

"He is doing it now with immigrants by ordering the ICE raids, which have been done in past under prove administrations," said Healy. "But he makes it sound as if he in his — his immigration team are going into cities to be willing to take families, you know, out of these places and deport them. And then also going hard at this citizenship census question."

"On the sowing division front. He brings in right wing extremists, fearmongers, basically people making their careers out of making things up on the Internet in order to sow disinformation and divide people, and playing into this sense of grievance that he has done over and over again," continued Healy. "It is sort of a classic Trump playbook strategy. And it's exactly right. It's coming right before a week that is, you know, a week he has wanted to avoid, let's face it, for a year and a half, having Robert Mueller get up in front of the entire world and say in detail what he found."