'Only the tip of the iceberg': Outrage over border abuses grows amid reports of sexual assault and retaliation by CBP agents 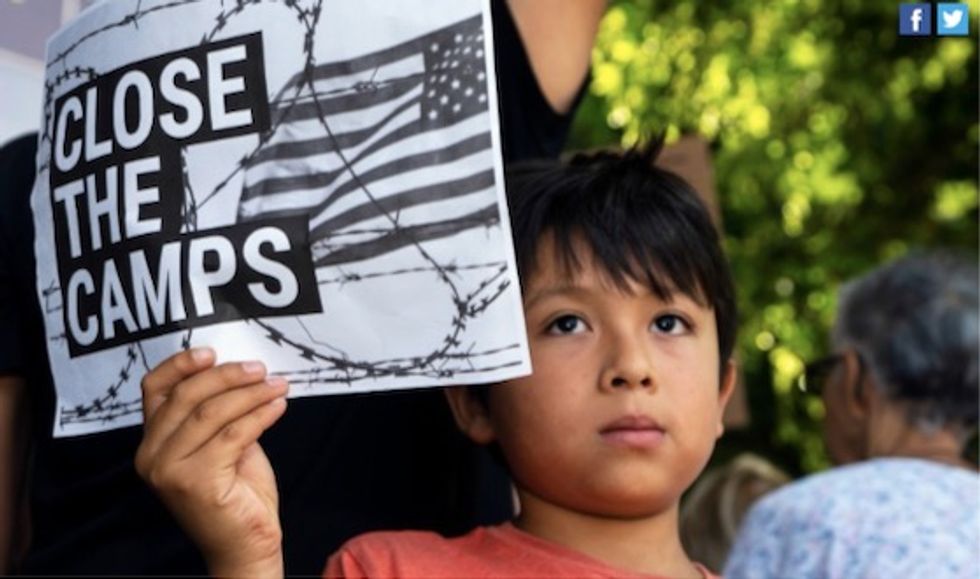 A child holds a sign during a Close The Camps protest against migrant detention centers in July. On Tuesday the latest news of abuse in the facilities broke, with migrant children reporting that Customs and Border Protection agents had sexually assaulted some children and had threatened retaliation against those who protested. (Photo by Ronen Tivony/SOPA Images/LightRocket via Getty Images)

"This is trauma that will forever impact their lives."

The office of the inspector general of the Department of Homeland Security said Wednesday it was investigating allegations that border agents sexually assaulted children in at least one migrant detention center and retaliated against children who spoke out about the conditions they've been forced to live in.

In internal reports obtained by NBC News on Tuesday, a 15-year-old girl reported that a Customs and Border Protection (CBP) agent had put his hands inside her bra, pulled down her underwear, and groped her during what was ostensibly a "routine pat-down," which children are reportedly subjected to in the detention centers that the Trump administration is running.

According to the allegations, the guard laughed with other staff members and spoke to them in English during the assault at a facility in Yuma, Arizona.

Lawmakers and immigrant rights groups expressed anger at the allegations.

🚨🚨Migrant children being held held in AZ, are reporting sexual assault and retaliation for protests in addition to… https://t.co/aIWSht3Ntc
— Voto Latino (@Voto Latino)1562723923.0

The girl's allegations are far from the first to detail sexual abuse within the U.S. government's immigrant detention centers. As Common Dreams reported last week, an immigrant was forced by agents at a Texas border station to wear a sign around his neck reading, "Me gustan los hombre," or, "I like men."

Immigration and Customs Enforcement (ICE) said last year that the agency is not responsible for abuses that take place in their detention centers, but last week a federal court ruled that a sexual assault survivor's case against a guard at Berks Family Residential Center in Pennsylvania could move forward. The detention center had argued that the alleged attack was consensual and that alleged sexual abuse should be assessed differently for immigrants in detention facilities than it is for American inmates in prisons or jails.

NBC's report also detailed how children in U.S. custody are frequently afraid to speak up about abuses in the facilities.

One 16-year-old boy from Guatemala reported that guards took the sleeping mats out of his cell after he complained about the taste of the food and water he was given, forcing him and the other children in his cell to sleep on the bare concrete floor. Another boy said he had worn soiled underwear for 10 days out of fear that he would be punished if he asked for a clean pair.

The NBC report comes weeks after a team of legal experts traveled to El Paso, Texas where they observed unsanitary conditions at detention centers, where children were going without basic hygiene products like soap and toothpaste.

The legal experts revealed that children have been given reason to fear speaking out about abuse like the allegations of the 15-year-old girl in Yuma, whose alleged assault was reportedly witnessed by other migrants. Children who were placed in a detention center in McAllen, Texas reported that after they witnessed border agents punching a child in the stomach, they were told not to report the assault because if they did so and couldn't prove their claims, they could be sent to prison for 25 years.

This week, U.N. High Commissioner for Human Rights Michele Bachelet said she was "deeply shocked" by the reports of abuse in migrant detention centers.

Paola Mendoza, a filmmaker who has also met with children after they were released from U.S. custody, warned that the stories being told now about conditions in detention facilities represent "only the tip of the iceberg."

I talked to dozens of migrants in El Paso after being released from detention centers. They all had HORRIFIC stor… https://t.co/o1MWf93spJ
— Paola Mendoza (@Paola Mendoza)1562767001.0