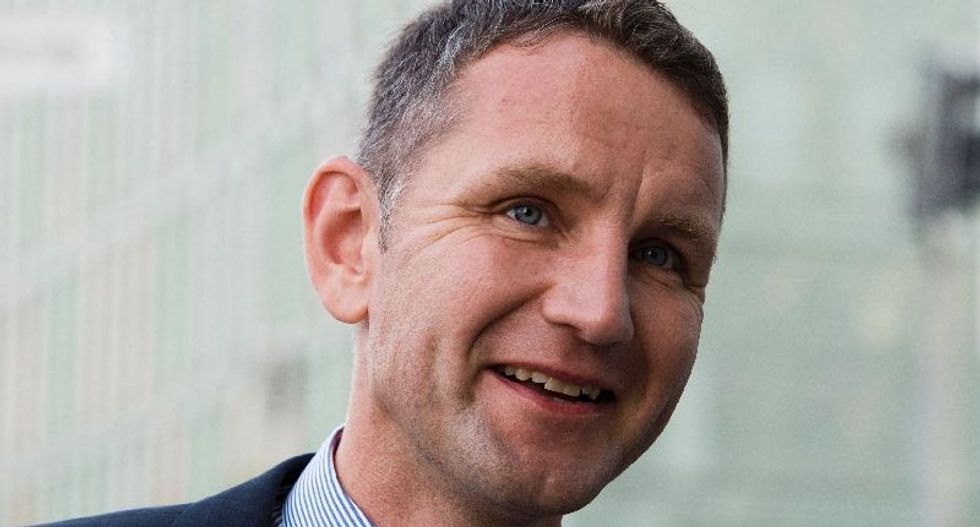 Bjoern Hoecke, a leading member of the Alternative fuer Deutschland party called for Germany to stop atoning for its Nazi past (AFP Photo/JOHN MACDOUGALL)

The far-right Alternative for Germany, battling stagnant poll results and suspicions of illegal funding, is now torn by a deepening rift between its party leadership and its most radical wing.

The turbulence comes as falling migrant arrivals have deprived the ultra-nationalist protest party of its main rallying cause, while the ascendant Greens have replaced them as the strongest opposition force.

The six-year-old AfD, which has seen splits and leadership coups before, is now torn between backers and foes of hardliner Bjoern Hoecke, months ahead of crucial state polls in its heartland in the ex-communist east.

Hoecke, 47, is party chief in eastern Thuringia state and leads the most extreme party faction, "The Wing", which is officially under surveillance by the domestic intelligence service.

The former history teacher once called Berlin's Holocaust Memorial a "monument of shame" and has marched arm-in-arm with the anti-Islam street movement Pegida in a rally joined by neo-Nazis in the city of Chemnitz.

Last weekend at a meeting of his grouping, Hoecke dramatically marched into the hall flanked by flag-waving supporters and went on to sharply attack the party's national leadership.

He vowed that after the autumn elections in Brandenburg, Saxony and Thuringia states that he would devote himself "with great passion" to the election of a new national party leadership.

Days later, 100 AfD politicians in a letter attacked Hoecke's "excessive personality cult" and declared that "the AfD is not the Bjoern Hoecke party".

Criticism also came from AfD co-chiefs Joerg Meuthen and Alexander Gauland, who fear The Wing's hard-right rhetoric is scaring off voters who see themselves as conservative patriots worried about immigration.

Gauland said he found both Hoecke's performance "inappropriate" and argued that if the party does not act "professionally," it will never win over the "middle-class majority we need to change this country".

Similar battles have flared in several German regions, including Bavaria where an internal party panel declared The Wing to be in a "competitive relationship" with the AfD.

The internal rift is the latest for the AfD, which was founded as a eurosceptic party in 2013, opposing bailouts for indebted Greece and other countries.

After a first leadership coup, it increasingly railed against immigration, multiculturalism and Islam, especially after the 2015 mass influx of migrants and refugees to Germany.

The AfD is especially strong in Germany's east which, almost 30 years after the fall of the Berlin Wall, lags the west in jobs and prosperity and has been a hotspot for xenophobia, racist hate crimes and support for far-right groups.

"Merkel must go" has been a common chant at AfD and Pegida rallies where mostly white, middle-aged men have vented their fury at what they see as a political and media elite that has betrayed them.

As public fears about immigration have abated somewhat, the AfD has increasingly campaigned on other issues -- against wind farms, opposing driving bans on diesel cars, and denying man-made climate change, a position even the AfD's youth wing rejects.

In May's European Parliament elections, the AfD scored 10.9 percent, less than it had hoped for.

It is polling strongly in parts of the east but faces fresh woes after a paperwork error ahead of the Saxony state election that could mean many AfD candidates won't get assembly seats even if elected.

Amid the ideological war inside the party, the eastern newspaper Magdeburger Volksstimme wrote that "the AfD is once more tearing itself apart".

Gauland, 78, a defector from Merkel's CDU party, said the AfD is going through a "puberty crisis" which was hindering its efforts to poach disaffected conservative voters.

The Frankfurter Allgemeine Zeitung daily judged that "Gauland's dream of a force that would bring together conservatives and radicals is increasingly proving to be a naive illusion".