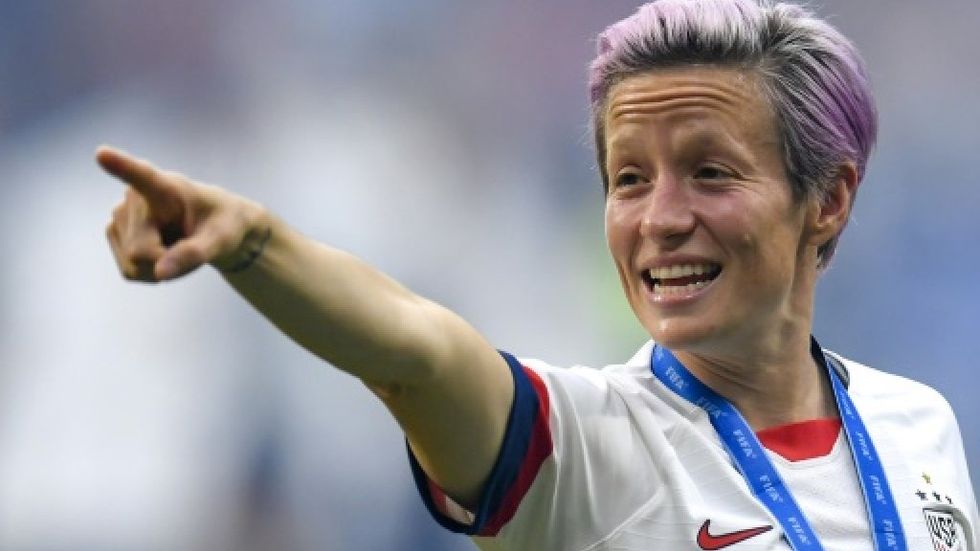 USA star Megan Rapinoe said it was "time to sit down and get to work" after hearing American fans greet the team's victory over the Netherlands in the women's World Cup final on Sunday with chants calling for equal pay.

Rapinoe has been a key player in the squad's battle for pay equality which led them to file a lawsuit against the US Soccer Federation earlier this year accusing the organisation of gender discrimination.

Trump put that spat behind him to tweet congratulations to the team on Sunday, while Rapinoe avoided getting drawn into another discussion about whether she would go to the White House.

"We have such a strong and proud and defiant group of women, I don't think we really have anything to say," said Rapinoe.

Her coach Jill Ellis simply said: "I haven't been invited so I can't say". When it was put to her that an invitation would surely be forthcoming, she replied: "I wouldn't bet on that!"

Rapinoe has been the biggest star on the field over the last month in France, and she scored the opener from the penalty spot as the holders beat the Dutch 2-0 in Lyon to retain their title.

It was the 34-year-old's sixth goal of the competition, allowing her to walk away with the Golden Boot for the top scorer as well as the Golden Ball for the player of the tournament.

Rapinoe said she had exchanged "pleasantries" with FIFA president Gianni Infantino as she collected her medal.

"Everyone is kind of asking what's next and what we want to come of all of this, and it's to stop having the conversation about equal pay and are we worth it," Rapinoe said.

"What are we going to do about it? It's time to sit down with everyone and get to work," she said, mentioning Infantino as well as US Soccer President Carlos Cordeiro.

"This game has done so much for all of us, we've put so much into it. I think it's a testament to the quality on the field, I don't think everything else is matching that."

Ellis herself offered glowing praise for Rapinoe, who missed the semi-final win over England due to injury but returned in style here, having earlier scored two goals in both the wins over Spain in the last 16 and France in the quarter-finals.

"Megan was built for this, built for these moments, built to be a spokesperson for others," said Ellis.

"She's incredibly eloquent, I think she speaks from her heart, and we need people like that in the game, to be honest, to call things for what they are.

"The past four and a half, five years, I've seen what she is capable of. The bigger the spotlight, the more she shines.

Ellis herself made history with the victory, as the USA retained their title to win a fourth World Cup. She is the first coach to win back-to-back World Cups in the men's or women's game since Italy's Vittorio Pozzo in the 1930s.

Ellis took charge in time to lead the team to victory at the 2015 World Cup in Canada but the make up of her side has evolved considerably since then.

Rose Lavelle, who scored her team's second goal on Sunday, reportedly watched the last final in a pizza shop.

Alex Morgan played four years ago and on Sunday won the penalty that led to Rapinoe's opener.

"It's going to take a while to come down from this high but I don't know if it's us getting older or the game just evolving and becoming more challenging but it has been so emotionally exhausting this time around," said Morgan, who also finished the tournament with six goals.

"She is the best teammate someone could ask for. She had an incredible tournament and is so deserving of the Golden Boot and the Golden Ball," the 30-year-old said of Rapinoe.