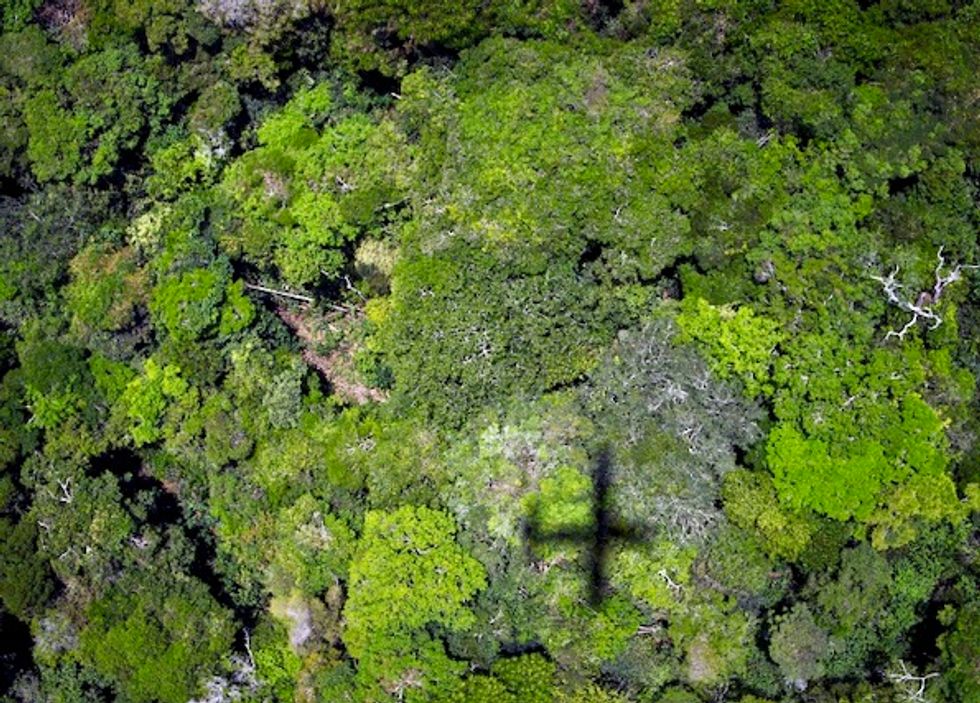 Good news: we can help halt climate change through a massive campaign of reforestation, according to a new study published Thursday.

Bad news: it would require covering an area the size of the United States in new trees, and even then some scientists are skeptical about the paper's conclusions.

Such an effort could capture two-thirds of manmade carbon emissions and reduce overall levels in the atmosphere to their lowest in almost a century, according to the research that was carried out by ETH Zurich and published in Science.

The study is the first to attempt to quantify how many trees the Earth can support, where to plant them and how much carbon they could store.

"We all knew restoring forests could play a part in tackling climate change, but we had no scientific understanding of what impact this could make," said co-author Thomas Crowther.

The researchers studied around 80,000 high-resolution satellite photographs of protected forest areas, from the arctic tundra to equatorial rainforest, to establish a "natural level" of tree cover for each ecosystem.

They then used machine learning to identify 10 soil and climate variables that determine tree cover in each ecosystem, and created a predictive model to map potential tree cover worldwide under current environmental conditions.

AFP/File / ERNESTO BENAVIDES The report marks the first attempt to quantify how many trees the Earth can support, where to plant them and how much carbon they could store

The paper found that the Earth can support 2.2 billion acres (900 million hectares) of trees that would sequester 205 billion tonnes of carbon.

Surprisingly, it found that these extra trees could be grown in croplands and urban areas, highlighting the major role agroforestry could play in tackling climate change.

The most recent report by the UN’s Intergovernmental Panel on Climate Change proposed that limiting climate change to 2.7 degrees Fahrenheit (1.5 degrees Celsius) will require up to an extra 2.47 billion acres of forest by 2050.

The team said their study evaluated the UN claim for the first time, showing where the trees could be restored and how much carbon they could capture.

The scenario, they added, is "undoubtedly achievable under the current climate."

But they warned that the need for action is urgent, since a warming climate was already reducing the amount of land that can support new forests.

Some experts who were not involved with the study, however, expressed skepticism about some of its findings.

"Restoration of trees may be 'among the most effective strategies,' but it is very far indeed from 'the best climate change solution available,' and a long way behind reducing fossil fuel emissions to net zero," said Myles Allen, a geosystem science professor at Oxford.

AFP/File / JORGE GUERRERO The most recent report by the UN’s Intergovernmental Panel on Climate Change proposed that limiting climate change to 1.5 celsius will require up to an extra billion hectares of forest by 2050

"Yes, heroic reforestation can help, but it is time to stop suggesting there is a 'nature-based solution' to ongoing fossil fuel use. There isn't. Sorry," he added.

Martin Lukac, a professor of ecosystem science at the University of Reading, added that one of the paper's weaknesses was its reliance on overly optimistic modeling.

"Planting trees to soak up two thirds of the entire anthropogenic carbon burden to date sounds too good to be true. Probably because it is," he said.

"Humans have enhanced forest cover on a large scale only by shrinking their population size (Russia), increasing productivity of industrial agriculture (the West) or by direct order of an autocratic government (China).

"None of these activities look remotely feasible or sustainable at global scale."