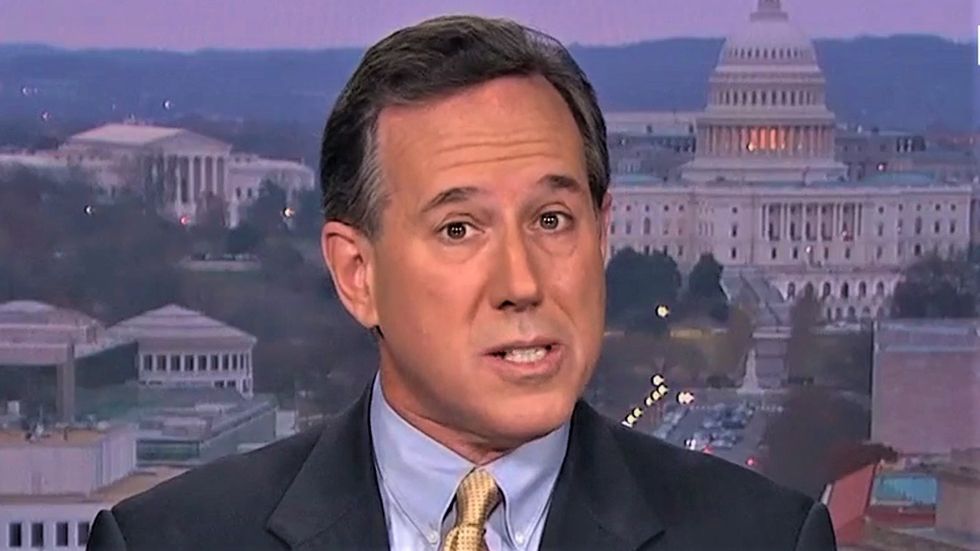 On Monday's edition of CNN's "Anderson Cooper 360," former Sen. Rick Santorum (R-PA) tried to argue that there was nothing racist about President Donald Trump's attacks on Baltimore as a "disgusting, rodent and rat infested mess" — and was instantly shot down by the rest of the panel.

"Here is the thing," said former Obama adviser Van Jones. "Trump attacks everybody. He's mean. He's rude. You say okay, why are you guys upset? He attacks people of color in a particular way. You know, if it's a place of color, it's an s-hole nation. It's a black city, it's a crime-infested city. If it's a leader of color, go back where you came from. Listen, he's rude, he's mean, but there's a particular kind of vitriol and there's a pattern here, and I think that's why people are so upset. Part of the danger we're in now is you can't let this stuff go and can't spend too much time talking about it, because I think he likes being seen as this racial provocateur, standing up to these people. And so it's a lose-lose situation for the country to have a president like this."

"But this particular motif, this theme he keeps coming back to — for instance, he would never say about Appalachia, 'These people are disgusting and they're crime-infested,'" said Jones.

"Because the representatives of Appalachia don't attack him on a regular basis," said Santorum.

"I don't remember when you were running against him, telling you, 'You should go back to Italy,'" pointed out former Obama campaign chief strategist David Axelrod.

"Well, it happened to my dad, but you're right," said Santorum. "Look, I'm not condoning any of the language. So let be very clear about that. But to say that somehow there is a difference between how Donald Trump attacks certain people and other people, the reality is what Donald Trump I think is trying to do, because I've talked to a lot of people around the Trump campaign, they really believe this is going to come as a shock, they believe they have an opportunity to make great gains in the black and grown community. They believe they have a great message and one of their messages is the people who are representing you now are not doing a bad job, and you need to get rid of these people and you need to try something different, and that may be part of the strategy."

"But how can telling four women of color to go back to where they came from not be seen in racial terms?" said Cooper. "To Van's point, he's at a — you know, at a rally in Alabama, he's not saying to people in the crowd, many of whom probably live in less than ideal circumstances or in tough circumstances or have, you know, in communities that are affected by opioid abuse, he's not calling those drug infested stuff. Those are all patriots because they are showing up to his rally."

"To me, in some ways, Democrats might want to be glad he's stepping on this badly," said Jones, noting that Trump could be spending this time talking about unemployment rates or the FIRST STEP Act, and is instead trampling all over that potential message.

"Here is the bottom line," said Axelrod. "This is exhausting, and people will get tired of it every day dividing the country ... It may be that people walk into the polling place, just enough who like things that he's done but say, 'You know what? I don't think we can do this for four more years.'"

"That is my greatest fear," admitted Santorum. "This president, I believe, given this economy and all the other things he's done, should be winning and it shouldn't even be a close race, but that's my biggest fear."