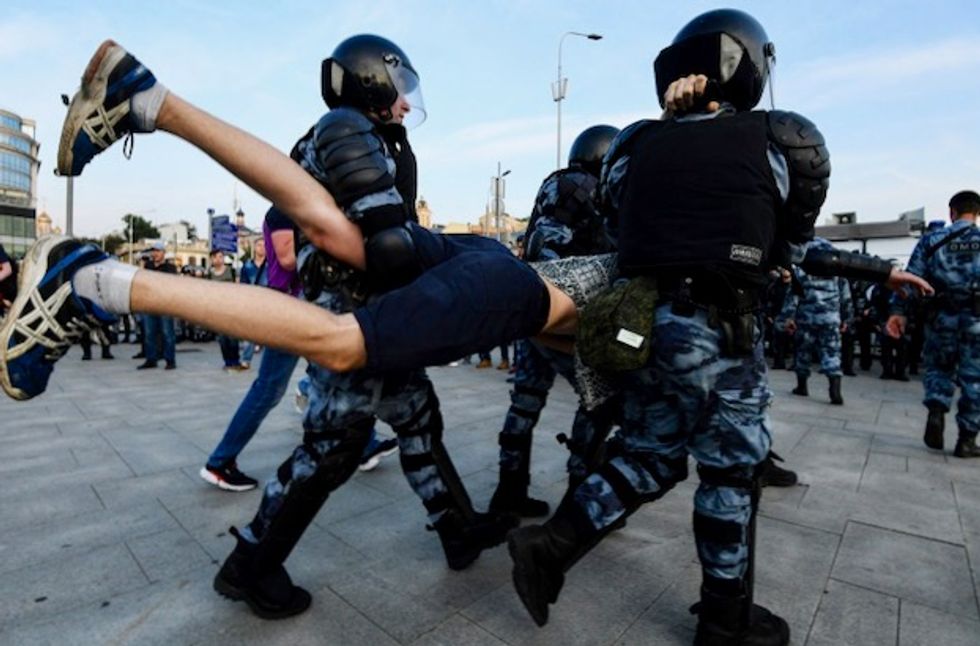 Russian investigators on Tuesday launched a probe into "mass unrest", a crime punishable by up to 15 years in prison, after thousands took to the streets at the weekend to demand fair elections.

Nearly 1,400 people were arrested on Saturday at an unauthorised protest in central Moscow that was broken up by baton-wielding riot police, as anger grows against authorities' refusal to allow prominent opposition candidates to stand for the city parliament.

Navalny.com/AFP / Handout Navalny was returned to prison despite fears raised by his personal doctor and lawyer that he was 'poisoned'

The crackdown was the largest of its kind since 2012, when tens of thousands of people came out to protest Vladimir Putin's return to the presidency after four years as prime minister.

Federal investigators said their probe would target not just the organisers of the weekend rally but also participants. The investigation will also look into violence against police and other officials, they said in a statement.

The probe is part of a wider move by authorities to quell the protest movement, which comes amid growing public frustration over declining living standards and a fall in Putin's approval ratings.

Opposition leader Alexei Navalny is serving a 30-day jail term for calling on people to attend the weekend demonstration.

On Sunday, the 43-year-old was taken from his prison cell to hospital after what was initially reported as a severe allergic reaction but his lawyer Olga Mikhailova said was a poisoning by an unknown chemical substance.

Navalny's doctor Anastasia Vasilyeva criticised authorities' decision to return him to prison following treatment, and complained on Tuesday she was not allowed to visit him in jail.

A number of other opposition figures, who applied to stand in the September elections but were rejected, have been jailed since the rally.

Opposition politician Dmitry Gudkov was on Tuesday sentenced to a month over an earlier unauthorised protest, while would-be candidate Ilya Yashin was jailed for 20 days in two separate sentencings.

The director of Navalny's Anti-Corruption Fund, Ivan Zhdanov, was on Monday jailed for 15 days, and independent politician Yulia Galyamina sentenced to 10 days on Tuesday.

Earlier Tuesday, a senior representative of the Russian prosecutor general's office called for a "severe" response to any further unauthorised rallies.

The opposition have however already called for a new unsanctioned protest on Saturday, and more than 13,000 people have indicated an interest on Facebook.

In a TV interview he defended the response of police, who he said were "obliged to use force" during the weekend demonstration.

The West has condemned the actions of Russian police, who used batons on demonstrators on Saturday. AFP journalists at the scene saw protesters with injuries.

Elections to Moscow's 45-seat legislative body, currently controlled by the ruling party United Russia, are to be held on September 8.

Local polls are a rare opportunity for dissenting voices to participate in political life as anti-Kremlin parties have been squeezed out of parliament over Putin's two decades in power.