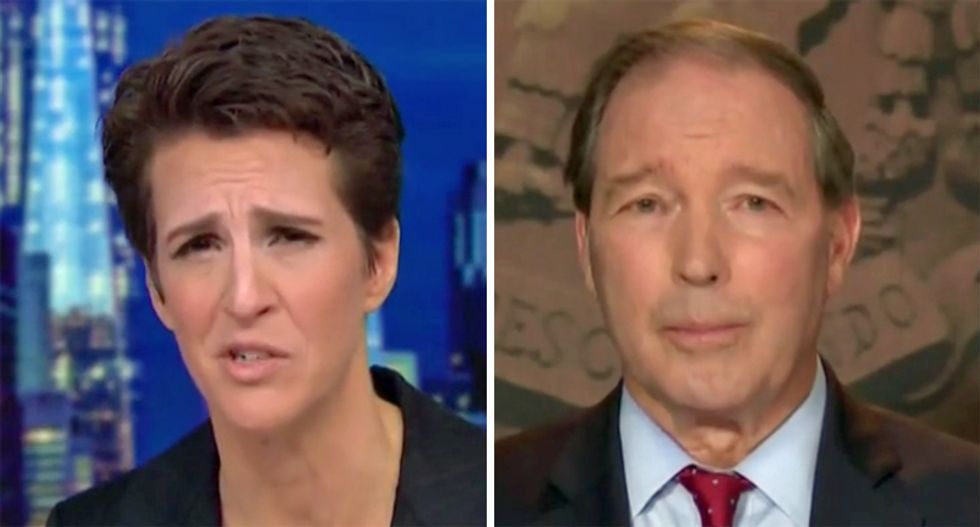 President Donald Trump's re-election campaign and the Republican Party could get stuck with a major bill for his military-themed Fourth of July rally.

"Fees for the National Park Service are supposed to go to improving the national parks, but instead they are diverting them to give them to the Trump event," Maddow reported. "That news was not well received in many quarters."

The host put up a tweet from Udall on the subject.

This is beyond the pale. The American people pay these entrance fees to make improvements at our national parks —… https://t.co/hqWVlaPpJb
— Tom Udall (@Tom Udall) 1562114353.0

Maddow asked Udall about whether the Senate Appropriations Committee had received documentation on the cost of the rally.

"We haven’t at all," Udal replied. replied.

"We have been absolutely stonewalled," he explained. "It’s really a disturbing and extraordinary situation really."

Udall said he will be seeking a General Accounting Office (GAO) investigation into the rally.

"I’m going to ask for a GAO investigation into if there were laws broken," he promised.

"Obviously, it’s illegal for public funds -- for taxpayer money to be spent on the president’s re-election and any partisan political activity whatsoever," Maddow noted. "How does that sort of thing get policed?"

"Well, after you have a GAO investigation and there has been a determination that there is a violation of the law and money should not be spent, then it will have to come from the political sector of his campaign or the Republican Committee -- which it basically had merged together at this point -- and they will have to pay the money back," Udall explained.

"We expect the law to be followed here," Udall added.