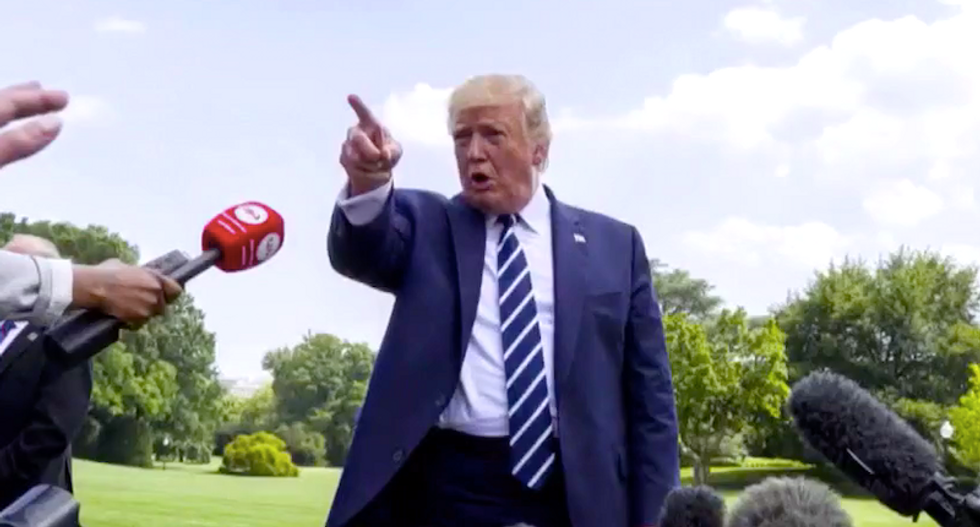 In the New York Times podcast "The Daily," Nate Cohn, polling and demographics expert for The Upshot, explained the President's strategy. Trump, who is deeply unpopular among the general population, is counting on rural white voters in Rust Belt states to defeat his Democratic challenger. And that means resorting to xenophobia and racism.

"Basically the president's approval ratings are underwater nationwide," Cohn says. But despite that, the president is better positioned to win re-election than the national polls suggest."

Thanks to the electoral college, Trump could, once again, lose the popular vote but win re-election.

"Because he is stronger in critical battleground states than he is nationwide. And, in fact, his position in the battleground states with respect to the country is even better than it was in 2016 when he was able to win the presidency while losing the national vote by two points." Cohn notes.

"So, it allows for the possibility that the president could win the electoral college and therefore the Presidency while losing the national vote by an even wider margin than he did in 2016."

"He would have a better chance to win at a greater deficit in the popular vote," Cohn says.

Cohn adds that although Trump may have lost support in sun belt states like Texas and Georgia, it's not likely that those traditionally red states will go for a Democrat. That leaves Rust Belt states -- and the white working class voters who helped propel Trump to victory in 2016 -- with an outsized influence in the election. Take Wisconsin. The president's approval rating in the state is at 47 percent, which gives him a path to victory if he can turn out his base and the white working class. He may also try to appeal to more educated Republicans in the state, by highlighting his record slashing taxes and dismantling Obamacare.

At the same time, he has to inspire the uneducated whites in the state, which helps explain why Trump is emphasizing immigration and continues to smear "the Squad."

Those voters are "against immigration. They support a border wall. They like guns. They think we should get tough on China. There's a lot in his playbook that they play into."

"The president will attempt to appeal to them through immigration and cultural issues."