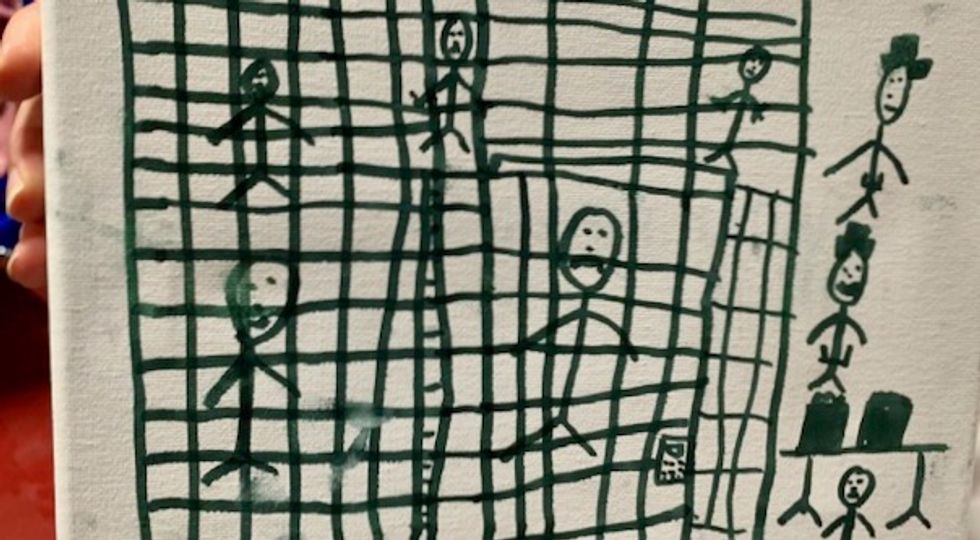 One of the drawings made by a child recently released from a U.S. Customs and Border Protection processing center. (Photo: American Academy of Pediatrics)

The Smithsonian's National Museum of American History requested drawings made by recently released migrant children, it was reported Monday—the same day that the United Nations human rights chief said she was "appalled" at the conditions faced by migrants in U.S. custody.

CNN reported Monday on the institution's request for the drawings.

"The museum has a long commitment to telling the complex and complicated history of the United States and to documenting that history as it unfolds," the museum said in a statement to CNN. Indeed, the Smithsonian's mission says it seeks to "explore the infinite richness and complexity of American history" and "help people understand the past in order to make sense of the present and shape a more humane future."

The drawings in question were made by two 10-year-olds and one 11-year-old, and were sharedwith media last week by the American Academy of Pediatrics (AAP). The children made them while at the Catholic Charities Humanitarian Respite Center in McAllen, Texas, after being released from a U.S. Customs and Border Protection (CBP) processing center.

The drawings captured the horrors on another level, showing the detained children's experiences through their own eyes.

"The fact that the drawings are so realistic and horrific gives us a view into what these children have experienced," Dr. Colleen Kraft, immediate past president of the AAP, told CNN.

Renee Romano, a professor of history at Oberlin College, told CNN that the museum's recognition of the children's drawings as historically significant was "an amazing" and "brave stance."

The heart of the human rights catastrophe, however, is the conditions that triggered the drawings in the first place, which prompted rebuke from U.N. High Commissioner for Human Rights Michelle Bachelet.

"As a pediatrician, but also as a mother and a former head of state," Bachelet said in a statementMonday, "I am deeply shocked that children are forced to sleep on the floor in overcrowded facilities, without access to adequate healthcare or food, and with poor sanitation conditions."

"Detaining a child even for short periods under good conditions can have a serious impact on their health and development—consider the damage being done every day by allowing this alarming situation to continue," she said.

Bachelet's call for humane treatment extended to adult migrants as well, and she urged U.S. authorities to comply with "human rights obligations."

"In most of these cases, the migrants and refugees have embarked on perilous journeys with their children in search of protection and dignity and away from violence and hunger," said Bachelet. "When they finally believe they have arrived in safety, they may find themselves separated from their loved ones and locked in undignified conditions. This should never happen anywhere."