Spaniards paraded alive in coffins in gratitude for defying death 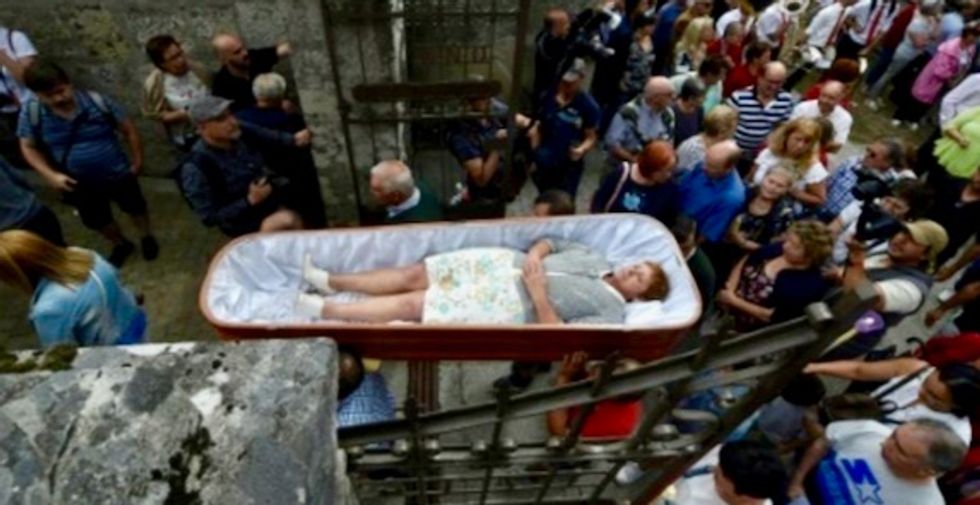 Six open coffins are paraded around a church and its cemetery as onlookers sing religious songs -- but their occupants are all perfectly alive.

This strange ritual takes place on July 29 each year in the village of Las Nieves in Galicia in northwestern Spain on the feast day of the local parish's most important saint, Martha, whose brother Lazarus was raised from the dead when Jesus visited their home according to the Bible's account.

It is intended as a way for people to thank the saint for having saved themselves or a loved one from death through illness or accident -- or to implore her to do so.

Among the devotees this year was Maria Rodriguez, who spent 45 minutes stretched out in a coffin as it was carried by pallbearers, to thank the saint for having saved her dog from cancer.

"It was something spontaneous," the 69-year-old retiree told AFP when asked why she decided to take part.

"You don't think, it comes from the heart and soul when you love someone," added Rodriguez who came from Vigo, the closest big city to the village, for the festival.

Several of those who were paraded in open coffins covered their faces with a fan or hats to hide their faces from the press and shelter themselves from the sun as hundreds of people lined the streets to watch the procession go by.

Modesto Gomez, a 70-year-old restaurant owner who has attended the festival since he was a child, said there was nothing morbid about it even though he acknowledged its could by "trying" physically and mentally to be carried in an open coffin.

"It's a cult of life. People who in difficult times make this great sacrifice," he said.

Las Nieves native Maria del Carmen Gonzalez, who wore a white shroud over her shoulders, watched the procession with her young daughter Aida.

Next year she wants relatives to be carried in two coffins -- one to thank Saint Martha for saving her husband from pneumonia and another to ask the saint to help her granddaughter with "several problems".

Gonzalez said that if it was up to her, she would go into a coffin herself but her family fears something could happen to her because of the heat.

The solemn procession, which marks the end of a nine-day fiesta in honour of the saint, passed by stands selling food and beer as well as an inflatable castle.

No one is sure where the tradition of parading people in open coffins comes from.

According to a book about the procession published in Las Nieves, the tradition could date back to the medieval crusades.

Nobles who left Galicia to take part in the crusades discovered in France the cut of Saint Martha.

When they returned they thanked the saint for having spared them from death by occupying their own coffins, according to this book.

Another explanation is offered by Carlos Hernandez, a sociologist writing a thesis about the procession.

In the past people would buy their own coffin while they were still alive when they had the means or when a family member was ill, he said

If a seriously ill person survived, they would donate their coffin to the local parish for those who could not afford one. It is not clear though when people started to be paraded in the coffins.

The procession is similar to other rituals in Spain that depict the fight being good and evil, life and death, said Hernandez.

"Its about daring to look at death, look at Evil, so that life wins," he said.

Another village in Galicia also stages a procession with coffins but in this case they are empty.