‘The president is a sexual predator’: Conservative says GOP ‘wrote their fate’ by trading family values for Trump 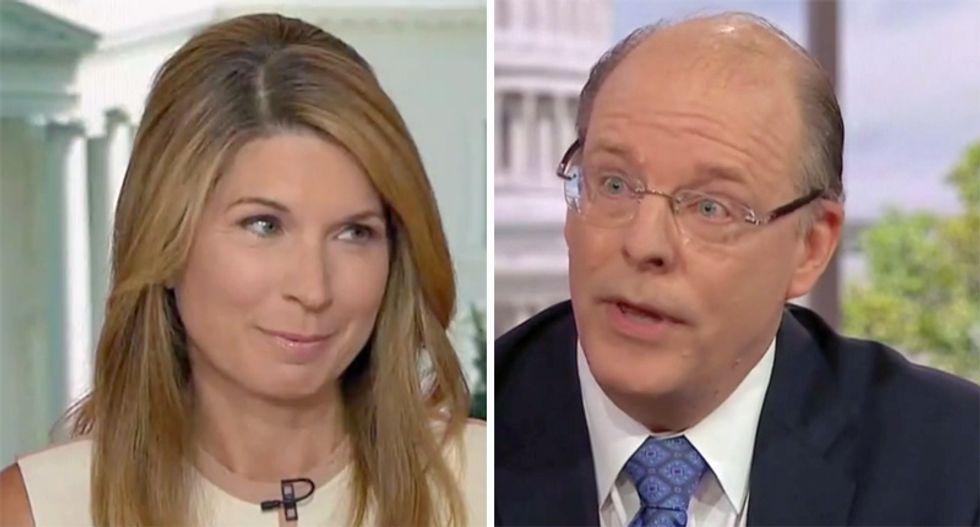 President Donald Trump is "a sexual predator" a veteran Republican declared on MSNBC on Tuesday.

Wallace asked Wehner why Republicans aren't standing up to Donald Trump and Labor Secretary Alex Acosta in the wake of the shocking revelations about Jeffrey Epstein.

"There are two dozen women who have accused him of sexual assault, so we have a president who is a sexual predator. The idea that he would be offended, morally or ethically troubled by anything that Acosta did is not going to happen," he said.

"And it is extraordinary -- both the silence of the Republican Party, I mean, this happened a while ago when they decided to hitch their wagon to Donald Trump and said that there was nothing that he was going to do say that they were going to object to, they wrote their fate," he explained. "And there’s no bottom with him and so there’s no bottom with them.

"And once upon a time this was a party that appointed itself as a party of family values," Wehner reminded.

"What a joke," interjected Wallace, who served alongside Wehner in the W. Bush administration.

"Yeah," Wehner said. "A joke and hypocrisy and just an extraordinary offense. I mean, these are young girls who are being sexually assaulted and they don’t care. And they’re siding with rich, powerful men against these kids -- and the fact that they’re not blinking twice is such an indictment."

Last week a very reasonable sounding fellow called into my show and said, essentially, “I voted twice for Trump and would again. Why do you think I’m a threat to America?”

We ended up debating tax policy and I never did fully answer his question (I’m a sucker for “reasonable”), so here’s my shot at it.

Iowa Secretary of State Paul Pate said voters should be on the lookout for election misinformation after an Iowa voter reportedly received a phone call with incorrect voting instructions.

Pate’s office received information this week that a Mahaska County voter received a call from an out-of-state number. The caller told him that he did not need to return his absentee ballot to his county auditor’s office, but could just register his vote over the phone. Voting over the phone is not possible, and as the voter did not request an absentee ballot, he refused and reported the incident.

On August 29, eight cartons of notarized paperwork challenging 25,000 voter registrations were delivered by pro-Donald Trump “election integrity” activists to Gwinnett County’s election offices in suburban Atlanta. They were accompanied by additional paperwork claiming that 15,000 absentee ballots had been illegally mailed to voters before the county’s 2020 presidential election.

Two days later, the activists held a briefing on the filings. It was led by Garland Favorito, a soft-spoken retired IT professional who has been agitating in Georgia election circles for 20 years and heads the non-profit, VoterGA. Favorito began by citing six lawsuits the group has filed against state and county officials – claiming counterfeit ballots, untrustworthy or illegal voting systems, and corrupt 2022 primary results. Then he turned to Gwinnett County.