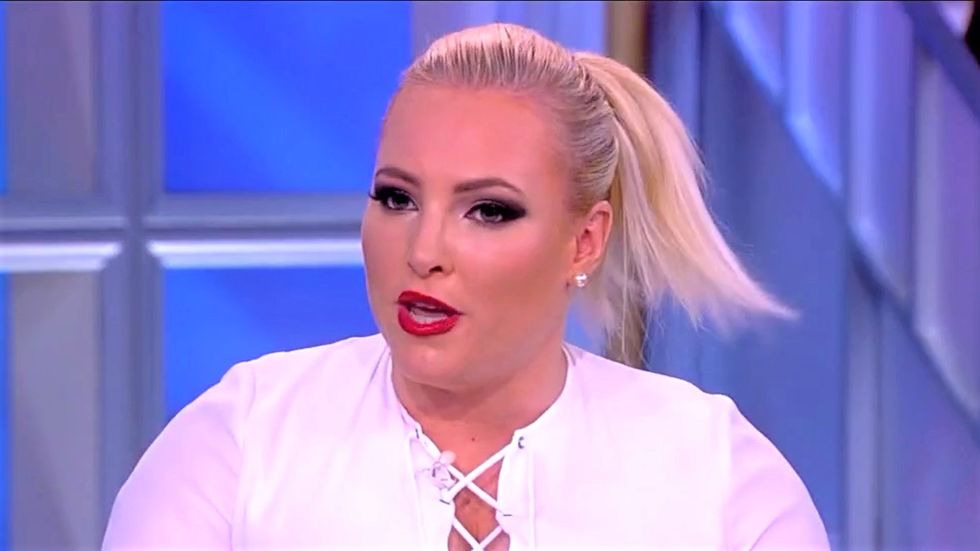 Meghan McCain on Tuesday reacted angrily when Democratic presidential candidate Beto O'Rourke said that President Donald Trump is acting like a Nazi during an appearance on ABC's "The View."

After O'Rourke talked about the need to stand up to Trump's extremism, McCain objected to some of the language he's used to describe the dangers of the movement that the president has been leading.

"You're talking about Trump supporters, comparing them to Nazis in Nuremberg," she said. "That sounds extreme to me as well."

"No, I'm not comparing everyone..." O'Rourke began.

"You compared his rally to Nuremberg!" McCain interrupted.

O'Rourke then replied to explain why he made that comparison.

"Asking four women of color to go back to their home countries..." he began.

"We agree on that!" McCain said, again interrupting.

"And then connect it to everything else he's doing," O'Rourke continued. "The press as the 'enemy of the people?' There is only one path that will take us down."

McCain then objected to say that O'Rourke still didn't have to talk disparagingly of people who attend Trump rallies.

"We all have accountability for our actions," O'Rourke said. "And everyone at that rally who shouted to 'send them back' is responsible for that as well."

At this point the audience erupted in cheers.

O'Rourke went on to explain how he understood that not everyone who voted for Trump was a bigot and said that he campaigned all over Texas, even in counties where Trump won huge majorities.

2020 Election The View Video
Report typos and corrections to: corrections@rawstory.com.