'This isn't funny': Warren tells Dems to 'stop using Republican talking points' on Medicare for All 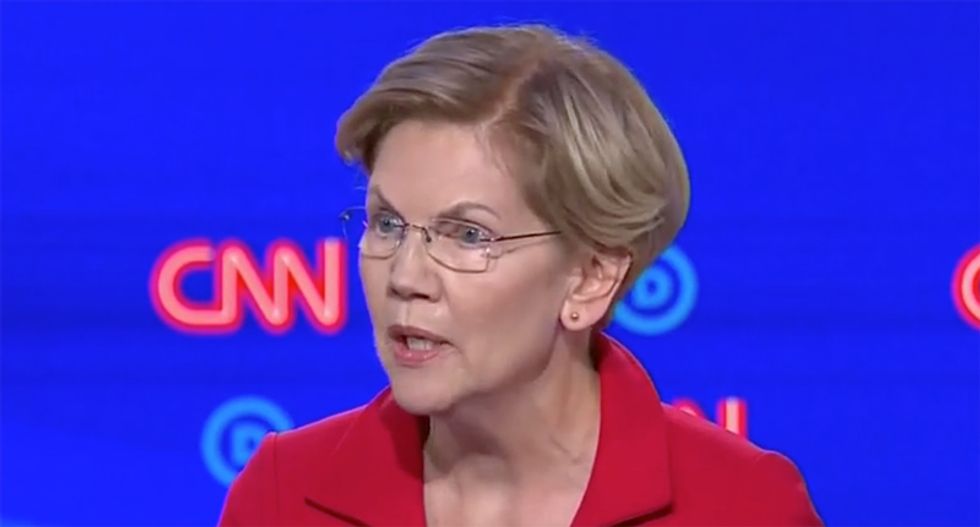 At the second round of debates among the Democrats seeking the White House in 2020, Sen. Elizabeth Warren (D-MA) scolded conservative Democrats for using Republican talking points against Medicare for All.

"Look, let’s be clear about this. We are the Democrats. We are not about trying to take away health care from anyone. That’s what the Republicans are trying to do," Warren said to applause.

"And we should stop using Republican talking points in order to talk with each other about how to best provide that health care," she urged.

Now I want to have a chance to tell the story about my friend Eddie Barken, he is 35 years old. He has a wife Rachel and a cute little boy named Carl. He also has ALS and it’s killing him, and he has health insurance, good health insurance and it's not nearly enough," she said, before moderator Jake Tapper interrupted her.

"I’d like to finish talking about Eddie. The guy who has ALS -- this isn’t funny -- this is somebody who has health insurance and is dying. Every month he has about $9,000 in medical bills that his insurance company won’t cover," she explained. "His wife Rachel is on the phone for hours and hours and hours begging the insurance company please cover what the doctors say he needs. He talks about what it’s like to go online with thousands of other people to beg friends, family and strangers for money so he can cover his medical expenses."

"The basic profit model of an insurance company is taking as much money as you can in premiums and pay out as little as possible in health care coverage. That is not working for Americans Medicare for all will fix that and that’s why I’ll fight for it," she concluded.