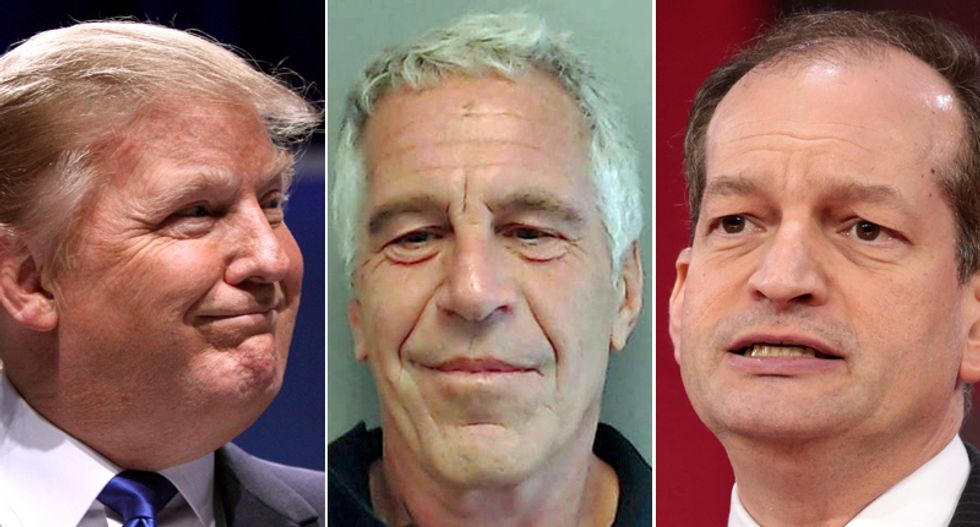 President Donald Trump's relationship with Jeffrey Epstein was explained on MSNBC on Monday.

"The Last Word" host Lawrence O'Donnell interviewed Tim O'Brien, the author of the 2005 book TrumpNation: The Art of Being the Donald.

"What is the Trump problem in this case?" O'Donnell asked.

"The Trump problem is there are possibly other shoes to drop about the relationship with Jeffrey Epstein," O'Brien replied.

"I spent a lot of time with [Trump] in the mid-2000s. He routinely spoke fawningly of Jeffrey. He admired Jeffrey’s lifestyle and his freedom and I think there is a certain synchronicity between these two guys -- they aren't too different," he explained.

"At one point Trump took me to the Miss Teen America headquarters on the East Side. He just acquired the rights to it and we went to the headquarters and he was saying he was glad he acquired this business to find girlfriends for his son, Eric," he explained. "He was jazzed to show me the young women who were part of the pageant. I suspect that’s something tied into Jeffrey Epstein. Trump himself has not kept that under wraps very much. He likes younger women. He is very bold-faced and bald-faced about it and they spend a lot of time together."

"There could be a Pandora’s box of embarrassing information," he noted.

"What would the worries be in Donald Trump’s mind tonight?" O'Donnell asked.

"I think he’s going to be worried about what compromising information Jeffrey Epstein has about Trump and their relationship," O'Brien replied.