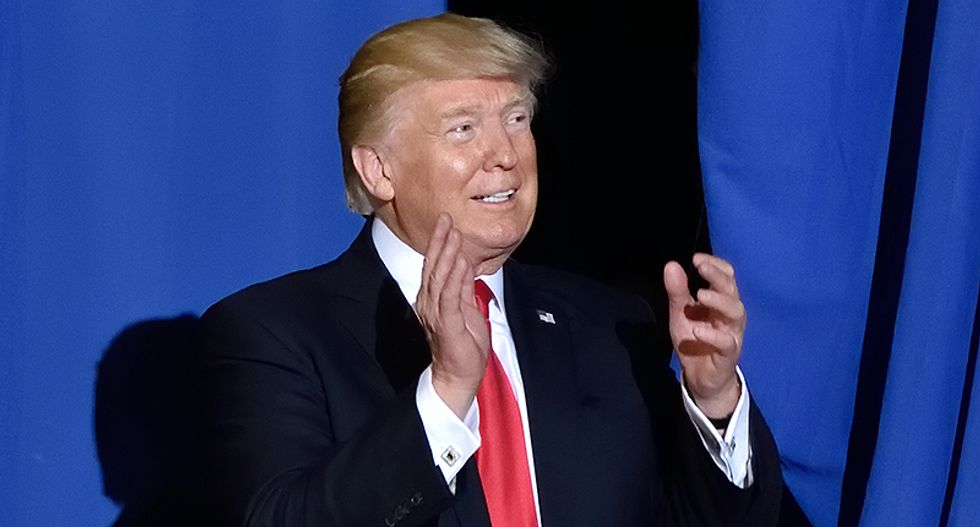 During the opening of "Meet the Press Daily," Trump campaign strategist Marc Lotter struggled trying to explain away why the president lied about trying to shut down the "send her back chant."

"Simple question," prefaced host Peter Alexander. "Why did the president lie saying that he tried to stop that chant?"

"Well, I think what he's showing is that -- as he was able to take that in -- he, he said that he did not agree with that," Lotter dodged the question. "But I think what we've got to make sure that we are talking about is that some of the statements that have been made by the Squad."

"We'll talk about the Squad in a second," cut in Alexander. "But just to be clear, he said, that when he took it in, he didn't say that he 'took it in.' He said, 'I started talking very quickly.' We can play it again. Thirteen seconds passed. He let it go."

"And if you go back into the 2016 campaign during the 'Lock her up' chants, they were actually clapping," Lotter said, confusing a racist attack with a political one.

"So 'lock her up' was okay, but this isn't?" Alexander shot back.

"The president said that this was not something he was comfortable with," Lotter said. "We're really focusing a lot on a three-word rally chant."

The difference in the chants is that one was a racist trope often used by white supremacists against people of color. The latter was a campaign promise that Trump would arrest Hillary Clinton for breaking the law. The Mueller report revealed that Trump was obsessed with arresting Clinton when Attorney General Jeff Sessions was in office. Even with Bill Barr, Trump has failed to "lock up" Clinton.

"What I would say is go back to 2016 and Hillary Clinton, well, she's still not locked up. It was a rally chant," Lotter accidentally revealed another of Trump's broken promises.

"Let's be clear about this, if there's a problem with a chant, will you agree that this chant is racist?" Alexander asked.

Lotter would only say that it doesn't "convey the spirit of the campaign." He was asked again if it was racist.

"I'm not going to say that it's racist," Lotter said.

"What's not racist about saying that an American who is a person of color to go back to their home country?" Alexander countered.

"They were saying 'Send her back,'" Lotter struggled. "What I'm saying is the president actually said today this is not what he believes in."

As evidenced by Trump's tweets about the women, he supports the idea that the women should be "sent back," otherwise he wouldn't have tweeted it, or he would have deleted the tweet and apologized.

Alexander pointed out that if Trump was so disturbed by it, why was he so eager to talk about it during the Wednesday rally.

"But the president did talk about that last night, but obviously the president began this entire episode with a tweet over the weekend where he said 'go back to your crime-ridden places from which you came,'" Alexander said. "So, the president, ultimately, isn't he the one responsible for this? He is the one who started this tweet in the first place. If this was about ideology, he could have said it was about ideology. He said, 'go back where you came from.'"

Lotter then pivoted to employ the "what about" strategy, blaming Democrats for using language he finds objectionable.

"He attacked people on Twitter saying these four women were socialists," Alexander continued. "There's only one Democratic Socialist in the party right now. It's Bernie Sanders. Why isn't he telling Bernie Sanders to go back to his home country? Why is he focusing on four minority members of the Democratic caucus?"

Lotter said it was more about the policies.

"There are a lot of people who proposed similar policies," Alexander said. "The Green New Deal, but he attacks but he focuses on these four individuals."

Alexander then asked if Trump is disavowing the chant Wednesday night if he's willing to disavow his own tweet from Sunday.

“He stands by the message of ‘go back to your home country’?” Alexander asked.

"He has talked about that in the past," Lotter struggled and dodged. He ultimately said that this message was more of one telling the women to love the country or leave it, which is not what he tweeted and certainly not what was chanted during the rally.