Trump’s pick for acting labor secretary was a sweatshops lobbyist 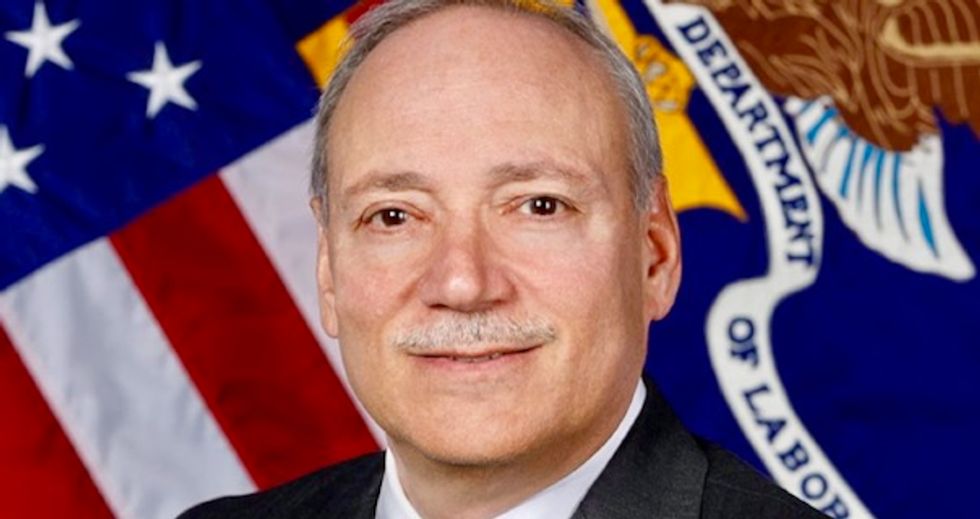 Washington, DC – .***Official Department of Labor Photograph***.Photographs taken by the federal government are generally part of the public domain and may be used, copied and distributed without permission. Unless otherwise noted, photos posted here may be used without the prior permission of the U.S. Department of Labor. Such materials, however, may not be used in a manner that imply any official affiliation with or endorsement of your company, website or publication.. .Photo Credit: Department of Labor.Shawn T Moore

President Donald Trump made two announcements Friday. The first, that his embattled Secretary of Labor was resigning amid outrage over having given accused child rapist and trafficker Jeffrey Epstein, now a registered sex offender, a sweetheart plea deal.

Pizzella, which few know, has a long history, going back to the late 1990's, of being a lobbyist for sweatshops, and, as Mother Jones reported, advocating to advance an economy of "indentured workers."

In August of 2017 Mother Jones reported "Trump’s Pick to Run the Labor Department Promoted Sweatshops on Remote US Islands."

It's a lengthy exposé, but Mother Jones makes clear what Pizzella was doing.

"Patrick Pizzella worked with Jack Abramoff to organize congressional junkets" and "helped lead a public relations campaign to rebrand the islands as a paragon of free-market principles. Between 1996 and 2000, emails and billing records reviewed by Mother Jonesshow that Pizzella and colleagues organized all-expenses-paid trips to the islands for more than 100 members of Congress, their staffers, and conservative thought leaders. When they got back, Pizzella helped them convince colleagues that the Northern Mariana Islands were, as his old boss Abramoff liked to put it, a 'laboratory of liberty.' "

The Leadership Conference on Civil and Human Rights in 2017 released a letter opposing Pizzella as Deputy Labor Secretary.

"Pizzella worked closely with Jack Abramoff to lobby for policies on the Commonwealth of Northern Mariana Islands that essentially allowed for unchecked slave labor to be performed with the imprimatur of the 'Made in the U.S.A.' label on goods and clothing."