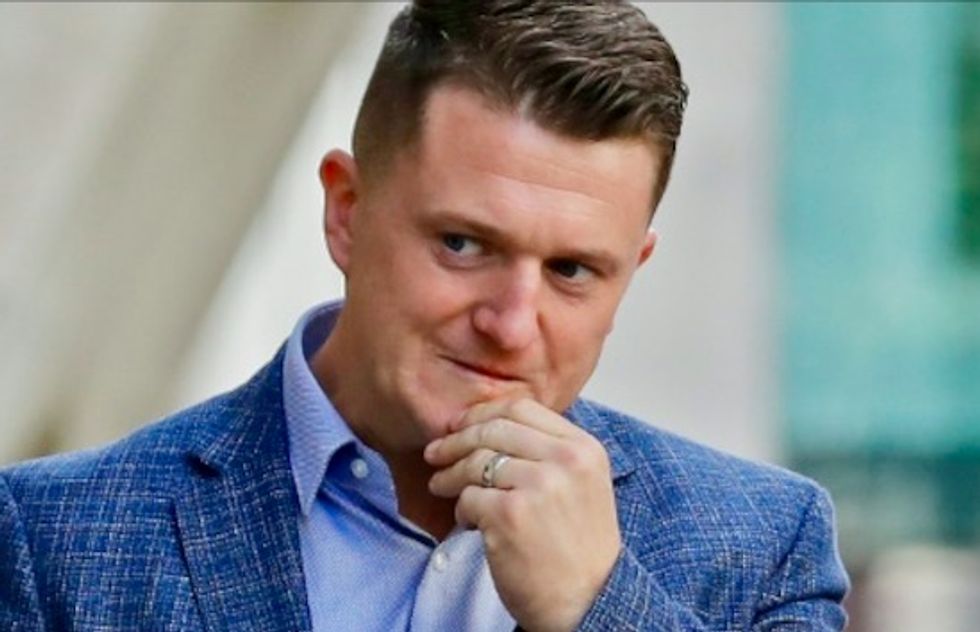 (FILES) In this file photo taken on July 5, 2019 Founder and former leader of the anti-Islam English Defence League (EDL), Stephen Yaxley-Lennon, AKA Tommy Robinson, arrives at the Old Bailey, London's Central Criminal Court, in central London, on the second day of his hearing about contempt of court charges.British far-right figurehead Tommy Robinson was jailed for 9 months for contempt of court on Thursday, July 11, 2019, having live-streamed a confrontation with defendants in a criminal trial that was subject to reporting restrictions AFP/File

British far-right figurehead Tommy Robinson was jailed for contempt of court on Thursday, having live-streamed a confrontation with defendants in a criminal trial that was subject to reporting restrictions.

Robinson, whose real name is Stephen Yaxley-Lennon, was sentenced to nine months in jail, minus the time he has already spent in prison, reducing his term to 19 weeks, of which he will serve half before being released.

"Nothing less than a custodial penalty would properly reflect the gravity of the conduct we have identified," judge Victoria Sharp said at the Old Bailey in London, England's central criminal court.

"The respondent cannot be given credit for pleading guilty. He has lied about a number of matters and sought to portray himself as the victim of unfairness and oppression."

Sharp and fellow judge Mark Warby last Friday found Robinson had acted in contempt when broadcasting footage of defendants arriving at Leeds Crown Court in northern England in May 2018.

He live-streamed footage of men accused of the sexual exploitation of young girls, while the jury in the second of a series of linked grooming trials was considering its verdicts.

Reporting restrictions postponed the publication of any details until the end of all the cases, in a bid to ensure all defendants received a fair trial.

Robinson, 36, denied any wrongdoing, saying he did not believe he was breaching any reporting restrictions and had only referred to information that was already in the public domain.

Robinson was jailed for 13 months in May 2018 after being found in contempt of court on the day of the broadcast.

He served 10 weeks in prison before being freed after the original finding of contempt was overturned by the Court of Appeal in August.

But the case was then referred back to Attorney General Geoffrey Cox, who announced in March that it was in the public interest to bring fresh proceedings against Robinson.

"I would urge everyone to think carefully about whether their social media posts could amount to contempt of court."

Scores of Robinson's supporters had gathered outside the court on Thursday, chanting his name and waving flags. He entered the building wearing a t-shirt saying "convicted of journalism".

Robinson has 28 days to appeal against his conviction.