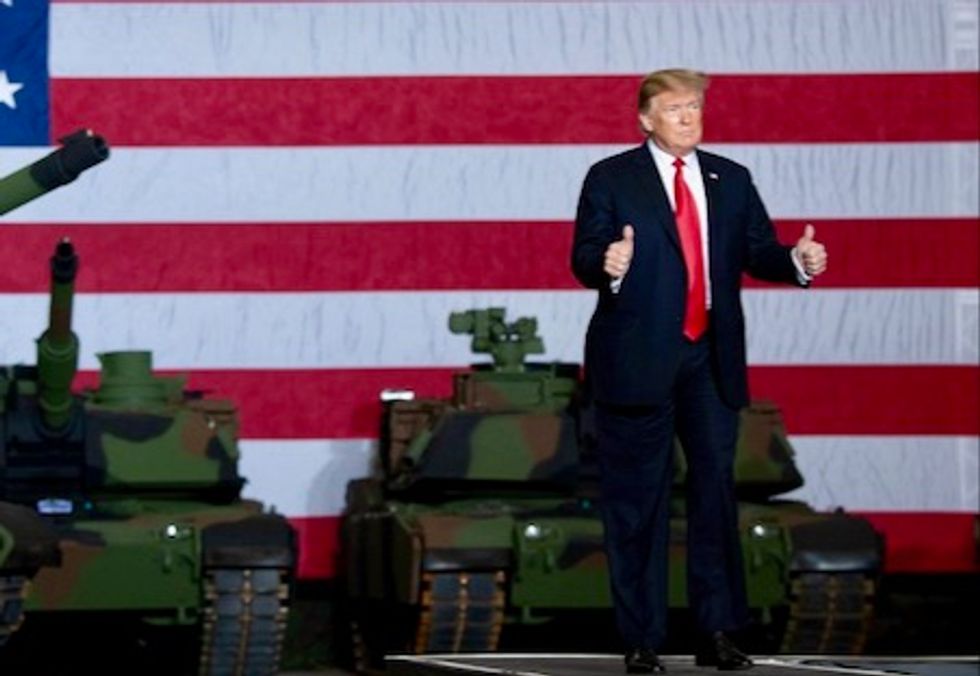 "Wanna know how broken and captured Washington is by the Pentagon and the corruption of our nation's 'defense' budget? Well, look no further than the soon to be enacted budget 'deal.'"

In a bipartisan deal that one anti-war critic said demonstrates how thoroughly "broken and captured Washington is by the Pentagon," 219 House Democrats and 65 Republicans joined forces Thursday to pass a budget agreement that includes $1.48 trillion in military spending over the next two years.

The House passage of the budget deal, which President Donald Trump quickly applauded on Twitter as a victory for the military, comes after the Congressional Progressive Caucus threatened in April to tank the measure in opposition to its out-of-control Pentagon outlays.

But most of the Progressive Caucus voted for the agreement on Thursday, pointing to increases in domestic spending.

"It's not a perfect deal by any means," Reps. Pramila Jayapal (D-Wash.) and Mark Pocan (D-Wis.), co-chairs of the Progressive Caucus, said in a statement ahead of the vote. "This deal does not address the bloated Pentagon budget, but it does begin to close the gap in funding for families, by allocating more new non-defense spending than defense spending for the first time in many years."

Stephen Miles, executive director of Win Without War, took issue with the latter claim in a series of tweets Thursday.

"You're no doubt hearing a lot of crowing from Democrats about how the deal they struck with Trump gives more money to 'non-defense' spending than to 'defense,'" Miles wrote. "Let's be clear that by every measure, save the one they're using, that's simply not true."

Wanna know how broken and captured Washington is by the Pentagon and the corruption of our nation's "defense" budge… https://t.co/ppIanUF2Tr
— Stephen Miles (@Stephen Miles) 1564070312.0

Under this deal, the Pentagon and its affiliated programs will get $1.48 TRILLION dollars over the next two years.… https://t.co/r2qNUzoBbA
— Stephen Miles (@Stephen Miles) 1564070826.0

William Hartung, director of the Arms and Security Project at the Center for International Policy, wrote for Forbes this week that the budget deal "vastly overpays for the Pentagon."

"The agreement sets the table for two of the highest budgets for the Pentagon and related work on nuclear warheads at the Department of Energy since World War II."

"The proposed figures are higher than spending at the height of the Vietnam and Korean Wars, and substantially more than the high point of the Reagan buildup of the 1980s," Hartung added. "And the Fiscal Year 2020 and Fiscal Year 2021 numbers are only slightly less than spending in 2010, when the United States had 180,000 troops in Iraq and Afghanistan, roughly nine times the number currently deployed."

The sweeping 2020 budget agreement is expected to pass the Senate next week, and Trump has signaled he will sign the measure.

Senate Majority Leader Mitch McConnell (R-Ky.) joined the president in celebrating the increase in military spending, which is significantly more than the Pentagon requested.

The deal, McConnell said, "achieves the No. 1 goal of the Republican side of the aisle, providing for the common defense."

As Common Dreams reported on Tuesday, House Speaker Nancy Pelosi (D-Calif.) came under fire from progressives for striking the budget agreement with Treasury Secretary Steve Mnuchin. Specifically, critics highlighted the deal to suspend the debt ceiling until 2021, a move that could give Republicans power to cripple the next president's agenda.

"If you really listen," wrote Splinter's Paul Blest, "you can almost hear [Texas Sen.] Ted Cruz yelling on the floor of the Senate that Congress shouldn't raise the debt limit by one more dollar unless President Bernie Sanders promises to drop his demand for Medicare for All."

Woody Allen says 'thrill is gone,' next movie may be his last

In a rare interview on Tuesday, filmmaker Woody Allen did not rule out Tuesday that his next movie, to be shot in Paris, will be his last, saying that "a lot of the thrill is gone."

The 86-year-old director and comedian, who fell from grace in the United States after his adopted daughter accused him of sexually abusing her as a child, spoke for about half an hour with actor Alec Baldwin on the latter's Instagram show.

Tennis's forgotten pathfinder Althea Gibson is given a voice

Althea Gibson's journey from poverty to becoming the first black person to win Wimbledon is the fulfillment of the American Dream but she remains shamefully unknown, the English playwright and actor who is playing her on stage told AFP.

Kemi-Bo Jacobs has tried to rectify that by writing and starring in a play, "All White Everything But Me", which is presently on at the Alphabetti Theatre in Newcastle, northeast England.

'Off-the-charts bonkers': MSNBC's John Heilemann tries to make sense of 'craziest' testimony ever about a president

Cassidy Hutchinson, a former aide to White House chief of staff Mark Meadows, testified that Trump knew his supporters were armed on Jan. 6, 2021, and still sent them to the U.S. Capitol.