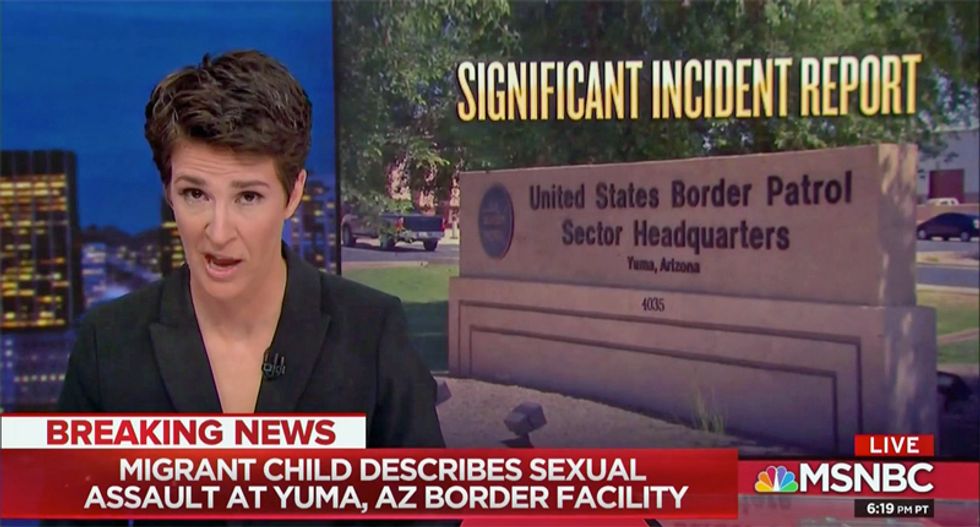 MSNBC revealed a blockbuster new story on Monday's "The Rachel Maddow Show" that resulted from a tip the host received.

Maddow's team worked with NBC News reporters Jacob Soboroff and Julia Ainsley for the bombshell report on one of the administration's concentration camps in Yuma, Arizona.

The report details the collective punishment of the detainees after they protested the conditions.

But even more shocking is a reported sexual assault.

"This one, I’ll tell you in advance, this one is disturbing. It concerns a 15-year-old girl," Maddow reported.

The host read directly from the Significant Activity Report.

“Minor reported that on April 8th, 2019, at approximately 9:00 p.m., she was inspected by a DHS officer who was heavy-set, tall and with a beard in front of many other immigrants (males, females, children). Minor reports officer asked her to lift her shirt up to bra line and put his hands inside her bra and touched her breast. Minor reported that she felt embarrassed as the officer was speaking in English to other officers and laughing," the report read.

"Minor then said he asked her to pull her pants down to her waist to verify she didn’t have other pants on underneath; however, minor said he then pulled them down himself and touched her waist and pulled her underwear," the report continued. "Minor reported officer then asked her to spread her legs and arms and patted her down in a way that made her feel uncomfortable at she felt he groped her body, her breast and private parts as well."

"Minor reported he continued to laugh and speak in English with other officers during the entire process," the report added.

The report says the incident was not investigated.