WATCH: Pete Buttigieg shames Republicans for not having 'the courage to stand up' to Trump 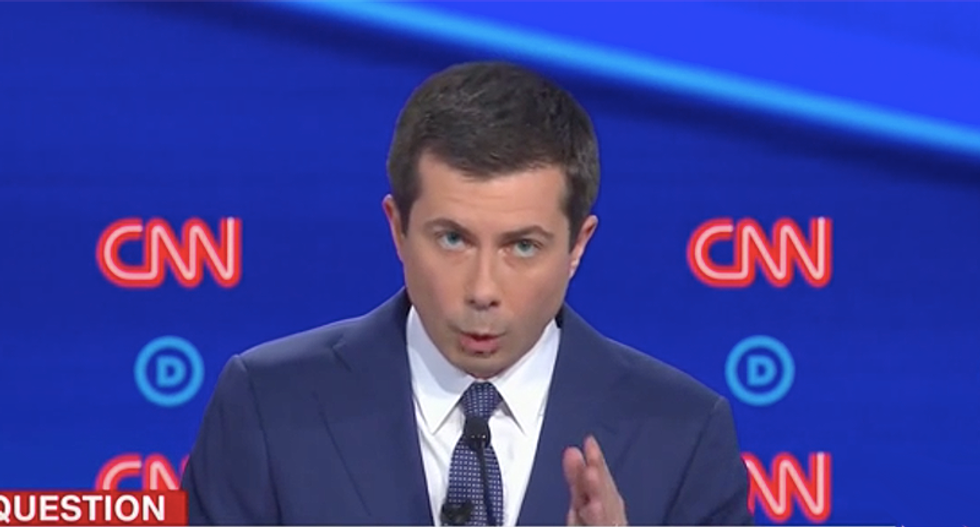 In perhaps one of the most epic moments in Tuesday's Democratic debate on CNN, South Bend Mayor Pete Buttigieg looked directly into the camera to shame Republicans for enabling President Donald Trump.

The question came as part of a question on age making a difference in politics, but the young candidate pivoted to talk about morals and principles being far more important.

"I don't care how old you are," he told debate moderator Don Lemon. "I care about your vision. I think it matters we have a new generation of leaders stepping up around the world. Leaders like the -- I actually it's good that the prime minister of New Zealand has gotten attention in these debates. She's masterful. She's younger than I would be. This is the trend America might be leading. Instead of following. Only if it's actually backed by the right vision."

He said that a president's age is hardly as valuable as their vision for the future.

"We need the kind of vision that will win. We cannot have a vision that amounts to 'back to normal,'" he continued. "It's the only reason we got this president, is that normal didn't work. We have to be ready to take on this president and, by the way, something that hasn't been talked about tonight: Take on his enablers in Congress."

He recalled David Duke running for governor of his state, the GOP at the time fled.

"Today they are supporting naked racism in the White House, or are, at best, silent about it," he continued. "If you are watching at home and you are a Republican member of Congress, consider the fact that when the sun sets on your career, and they are writing your story, of all the good and bad things you did in your life, the thing you will be remembered for is whether in this moment with this president you found the courage to stand up to him or continue to put party over country."