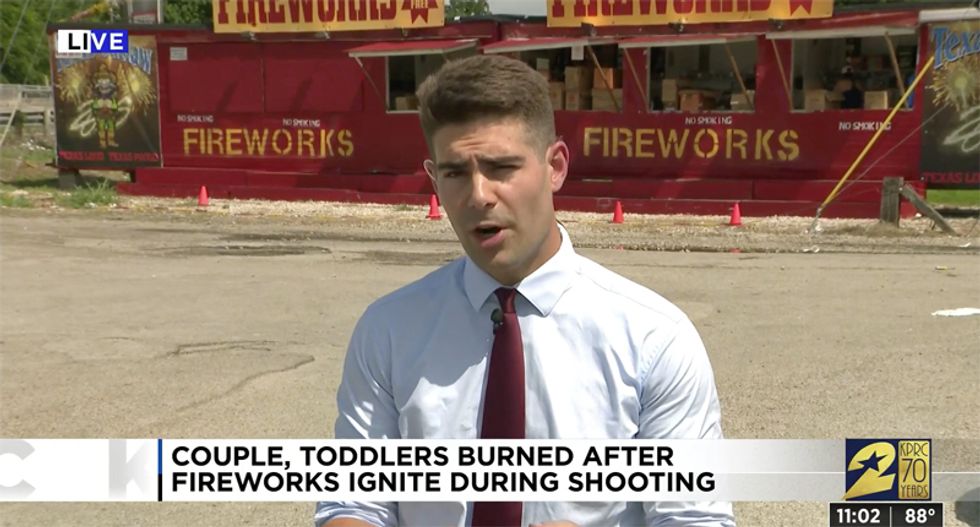 Surveillance video from a Texas gas station captured an inferno caused after a gunshot ignited fireworks and nearly killed a family of four.

Two adults, a toddler, and a baby suffered "severe burns" in the fire, KPRC-TV reports.

"Witness Peter King said the situation started when a man and his family were buying fireworks and got into an argument with another man who parked behind the man's truck, blocking the family in," the station reports.

The truck was followed to a nearby gas station, where a gun was brandished.

The family attempted to leave, but the man discharged his weapon, igniting the fireworks the family had just purchased.

"When he jumped in his truck to leave the other man started shooting at him," King said. "(The explosion) sounded like a cannon. Everybody started running and getting out the way. It was a horrible feeling to see something like that."

Bystanders were able to rescue the family from the burning truck, but not before they suffered severe burns.

“The two children were (taken via Life Flight) to UTMB Galveston with severe burns,” Harris County Sheriff’s Detective Tom Turner said. “The mother was also transported (and) the father has since been transported.”

Authorities are searching for the gunman, who was last seen driving a late model Ford Expedition. Authorities believe there were three other people in his vehicle at the time of his attack.