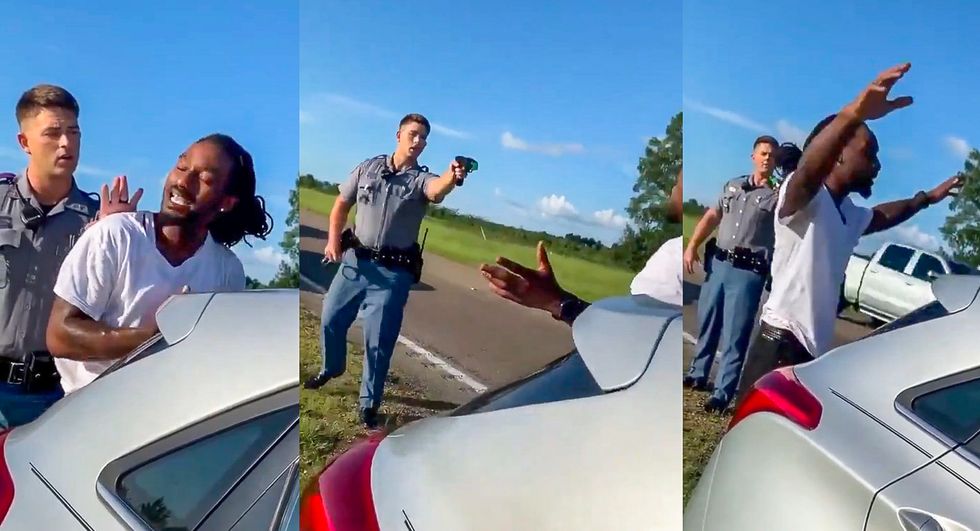 A routine traffic stop turned violent after a Texas officer tried to arrest a black man for allegedly speeding.

In a video shared by Twitter activist @_SJPeace_ on Tuesday, an officer, who appears to be Mississippi law enforcement, tells the driver that he is being "detained."

"For what?" the man asks. "That's what I'm trying to get an understanding of. You had an attitude when I looked in your eyes."

"Get your hands behind your back!" the officer demands.

"Why am I being arrested?" the man wants to know.

"You're being arrested for speeding!" the officer snaps. "And now you're resisting arrest."

"That ain't what you told me," the man replies.

The officer tries to put handcuffs on the driver, but he resists. The officer quickly pulls out a Taser or other weapon.

"Please don't do that!" a woman shouts from off camera.

The driver indicates that he will wait for backup instead of complying with the officer's order to "get on the ground."

Backup quickly arrives and the two officers team up to forcefully take the driver down.

In a Facebook post, Porsha Shields said she recorded the video and that the officer was aggressive towards her.

"I truly felt that I should have never told him I was pregnant because it seemed like he became more aggressive...And, what hurts the most is knowing that my 4 year old son witnessed me screaming, crying and getting assaulted as this event will psychologically impact us forever..." she remarked.

Black man was pulled over by a Texas cop without given a reason. The cop then tries to arrest him. After he asks mu… https://t.co/PPR5Hrmxc8
— StanceGrounded (@StanceGrounded) 1564458537.0

Patiently waiting for another officer to come on scene in hopes that that officer would understand he did not commi… https://t.co/MBN03ZK04X
— StanceGrounded (@StanceGrounded) 1564488366.0