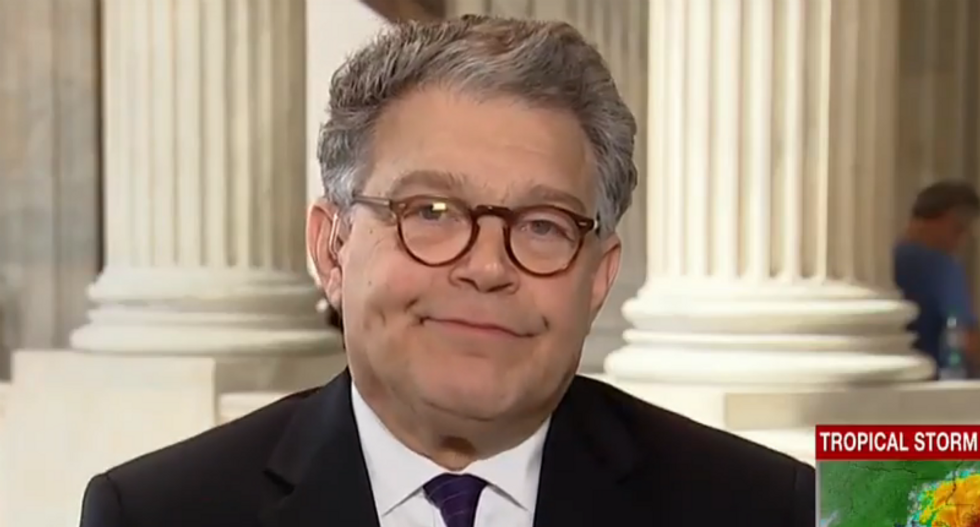 The defenders of Sen. Al Franken are perhaps the single most embarrassing group of allegedly progressive people in the Democratic coalition. Franken, who resigned from the Senate in January 2018, was accused by eight different women of sexual impropriety. Most of these accusations were both serious and credible, in that the women making them were mostly liberals who had no apparent reason to lie about Franken's behavior toward them. Despite this, Franken's defenders are married to the delusional belief that it's all just a frame-up and that if he'd had "due process" in the form of a Senate ethics investigation (run by Republicans, who control that chamber) he would have somehow managed to prove this.

Now, in a truly baffling move, New Yorker staff writer Jane Mayer — who has an otherwise excellent record of exposing sexual harassment and abuse — has put out a frankly hackish piece defending Franken and giving ammunition to a year and a half of bad-faith arguments coming from his defenders who really ought to know better. In a lengthy article that's framed as if it were an exposé, Mayer gives grist to conspiracy theories that paint Franken as a victim and minimizes the fact that he was accused of groping by four women — two of whom put their names to the accusations — and of forcible kissing by two other women. She makes great hay out of how some women remain anonymous, gliding past the fact that while the journalists who interviewed them did not share their names publicly, they have confirmed their identities.

The focus of Mayer's article, like the focus of the incoherent conspiracy theories that preceded it, is the role of a woman named Leeann Tweeden, who kicked off the cascade of accusations against Franken by sharing a photograph in which he appears to be pretending to honk her breasts while she's asleep. The photo gave credence to Tweeden's claims that Franken groped and  kissed her against her will.

Mayer presents a strong case that Tweeden's accusations are false. At best they were result of a miscommunication but more likely they reflect the fact that Tweeden is a right-wing operative who has, in the past, elevated the false accusation that Barack Obama faked his birth certificate.

The problem here, however, is that even if the first accusation was an old-fashioned right wing rat-f*cking, the next seven accusations were not. The accusers were, in order: A fan of Franken's who said he grabbed her butt during a photo, two women who say Franken groped them at fundraising events, a soldier who says Franken groped her during a USO event, another progressive politician who says he forcibly kissed her, a Democratic aide who says he tried to kiss her, and an Atlantic writer who objected to the way Franken grabbed her waist.

None of these women are right-wing operatives. Most of them are clearly involved in Democratic politics and seem to have nothing to gain from lying about Franken. While a couple of the stories are relatively minor, several — such as the allegations of groping and the allegation of a proposition — are clear-cut examples of sexual harassment of the sort that Mayer has, in the past, put her talents toward exposing.

I personally had heard one of these stories (one of the fundraiser ones) on the grapevine before Tweeden made her accusations, which shows that the woman involved had privately complained about Franken's behavior before ever going public.

To get around this problem, Mayer relies on some frankly hackish tricks. First, she buries the supporting evidence, spending many pages detailing Tweeden's unreliability before even touching on the details of the other accusations. Then she introduces the possibility that it was all just a misunderstanding, dedicating heavy amounts of attention to claims that "Franken could be physically obtuse," and that he swings his arms too much and chews with his mouth open, and planting the idea that the women were simply overreacting to Franken's awkwardness. She compares him to Joe Biden, who has been accused of being too familiar but not, unlike Franken, of groping.

She even quotes an aide saying, "There’s a difference between molesting someone and being friendly."

Indeed there is, which is why it's important to remember that out of the eight women who have come forward, four of them shared stories of behavior no one could really mistake for "being friendly." Butt-honking is not, in any of the 50 states, within the realm of friendly behavior that is merely being misinterpreted.

Mayer works around this problem by focusing more heavily on the complaints about kissing and waist-grabbing, which are more plausible examples of possible miscommunications than butt- or breast-grabbing.

The story hits on all the Stations of Franken Denialism, such as minimizing the nature of some of the accusations, focusing more on Tweeden than the other accusers and harping on the anonymity of some without acknowledging that Franken Denialism, in itself, makes coming out a real threat to the livelihoods of the progressive and Democratic women who have accused Franken.

Of these, the "due process" one is perhaps the worst, because it sounds so reasonable. Who doesn't love due process? Its due-ness is right there in the phrase!

"I asked him for due process and he said no," Mayer records Franken saying of Senate Minority Leader Chuck Schumer.

Mayer does, to be fair, include writer Rebecca Traister pointing out that such investigations might take months, meaning that Franken's Democratic colleagues would have endured "being grilled on it every day" until that wrapped up.

Even that point underestimates how absolutely ugly it would have gotten if Franken had dragged out the whole affair with a Senate ethics investigation. What Mayer fails to capture is that, however much Franken thought he was due a process, any attempt to drag this out would have done real harm to the Democratic Party.

That almost certainly would have meant Franken sitting on the Senate Judiciary Committee during Brett Kavanaugh's Supreme Court confirmation hearings, giving Republicans a neat and, frankly, irrefutable piece of evidence that Democrats only take credible allegations from multiple women seriously if it benefits them politically. Even if the investigation had somehow been wrapped up and Franken pushed out, the fact that Democrats fought for Franken would have been used as justification for Republicans fighting for Kavanaugh.

What happened instead was good for the Democrats. Franken was out because his colleagues stood up to him, meaning those same Democrats had the moral authority to go into the Kavanaugh hearings ready to take a clean shot at Kavanaugh and the Republicans who backed him. That moral clarity didn't stop Kavanaugh from getting his lifetime seat on the high court. It did mean it was significantly easier to rally the anti-Kavanaugh forces without being hobbled with hypocrisy allegations. Those who were rallied stayed rallied going into the 2018 elections — and helped Democrats flip 40 House seats and retake the majority.

That's what is ultimately most baffling about the avid Franken defenders. They seem to be motivated by loyalty to Democrats, but the actions they prescribe would have only hurt actual Democrats in power, especially Democratic women in the Senate, and hobbled their ability to take a clear moral stand on the issue of sexual harassment and abuse. Which is why it's not unreasonable to believe that ultimately they aren't actually worried about the Democrats winning, so much as that they don't want to feel bad about having placed their trust in Franken in the first place.

Mayer's piece, meanwhile, is an example of how even the smartest people — perhaps especially the smartest people — can let their own wishes blinker them to ugly realities. It's crushing to believe that Franken, who was widely regarded as a good guy, could have done what he was accused of doing. So thousands of otherwise smart people have put their powerful brains to work coming up with elaborate rationalizations to dismiss a story they don't like in favor of one they do. Mayer's story is a sad illustration that even those we think are immune to that trap can fall into it, if they like someone enough to excuse his inexcusable conduct.