“What to the slave is 4th of July?': James Earl Jones reads Frederick Douglass’s historic speech 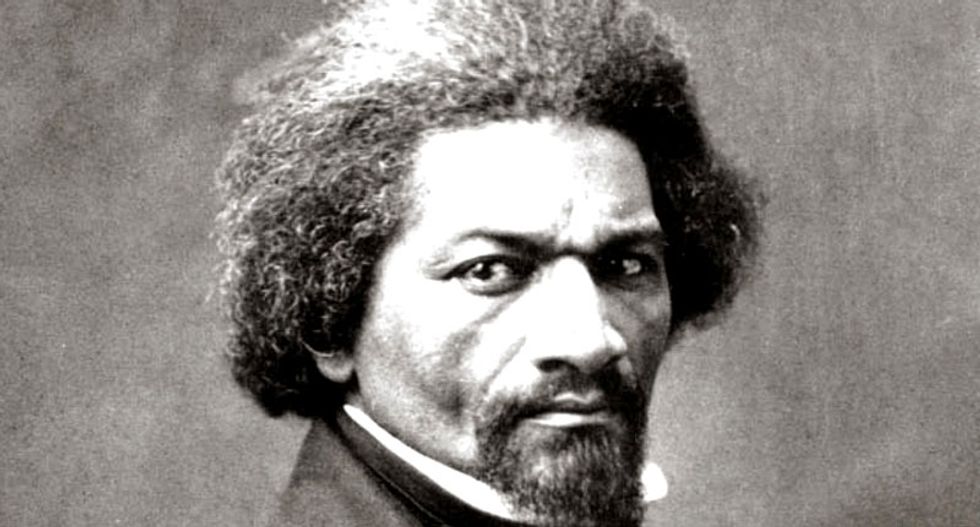 In a Fourth of July holiday special, we hear the words of Frederick Douglass. Born into slavery around 1818, Douglass became a key leader of the abolitionist movement. On July 5, 1852, in Rochester, New York, he gave one of his most famous speeches, “The Meaning of July Fourth for the Negro.” He was addressing the Rochester Ladies Antislavery Society. This is actor James Earl Jones reading the speech during a performance of historian Howard Zinn’s acclaimed book, “Voices of a People’s History of the United States.” He was introduced by Zinn.

AMY GOODMAN: Today, in this special broadcast, we begin with the words of Frederick Douglass. Born into slavery around 1818, Douglass became a key leader of the abolitionist movement. On July 5th, 1852, in Rochester, New York, he gave one of his most famous speeches, “What to the Slave Is the Fourth of July?” He was addressing the Rochester Ladies’ Anti-Slavery Society. This is the actor James Earl Jones reading the historic address during a performance of Howard Zinn’s Voices of a People’s History of the United States. This is the late great people’s historian Howard Zinn.

HOWARD ZINN: Frederick Douglass, once a slave, became a brilliant and powerful leader of the anti-slavery movement. In 1852, he was asked to speak in celebration of the Fourth of July.

FREDERICK DOUGLASS: [read by James Earl Jones] Fellow-citizens, pardon me, allow me to ask, why am I called upon to speak here to-day? What have I, or those I represent, to do with your national independence? Are the great principles of political freedom and of natural justice, embodied in that Declaration of Independence, extended to us? And am I, therefore, called upon to bring our humble offering to the national altar, and to confess the benefits and express devout gratitude for the blessings resulting from your independence to us?

I am not included within the pale of this glorious anniversary! Your high independence only reveals the immeasurable distance between us. The blessings in which you this day rejoice are not enjoyed in common. The rich inheritance of justice, liberty, prosperity, and independence bequeathed by your fathers is shared by you, not by me. The sunlight that brought life and healing to you has brought stripes and death to me. This Fourth of July is yours, not mine. You may rejoice, I must mourn. To drag a man in fetters into the grand illuminated temple of liberty, and call upon him to join you in joyous anthems, were inhuman mockery and sacrilegious irony. Do you mean, citizens, to mock me, by asking me to speak today?

What, to the American slave, is your Fourth of July? I answer: a day that reveals to him, more than all other days of the year, the gross injustice and cruelty to which he is a constant victim. To him, your celebration is a sham; your boasted liberty, an unholy license; your national greatness, swelling vanity; your sounds of rejoicing are empty and heartless; your denunciation of tyrants, brass fronted impudence; your shouts of liberty and equality, hollow mockery; your prayers and hymns, your sermons and thanksgivings, with all your religious parade and solemnity, are, to Him, mere bombast, fraud, deception, impiety, and hypocrisy—a thin veil to cover up crimes that would disgrace a nation of savages. There is not a nation of the earth guilty of practices more shocking and bloody than are the people of these United States at this very hour.

AMY GOODMAN: That was James Earl Jones, reading the words of Frederick Douglass.