White House flack: Trump made it clear he 'disagrees with' and 'stands with' people who chanted 'send her back' 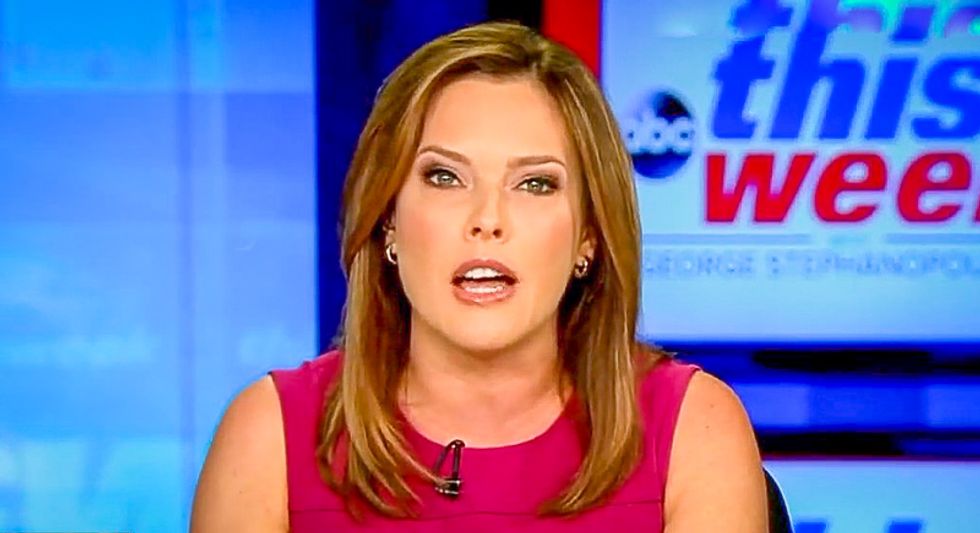 White House spokesperson Mercedes Schlapp on Sunday insisted that President Donald Trump "stands with" people who chanted a racist slogan at his rally last week -- although she also claimed that he disagrees with the chant itself.

In an interview on ABC's This Week, host George Stephanopoulos asked Schlapp why Trump let the racist "send her back" chant go on for 13 seconds after he attacked Rep. Ilhan Omar (D-MN).

"He is not a racist," Schlapp said of the president. "He's a compassionate man whose policies have focused on the minority community."

"You also saw him in that room in North Carolina -- 13 seconds as the crowd chanted 'send her back,'" Stephanopoulos pointed out. "It seems like you're at odds with the president, you had a different reaction to that chant."

"Not at all," Schlapp insisted. "The president disavowed the chant. The president made it clear he wasn't happy with the chant and he disagreed with it."

"Hold on a second," Stephanopoulos interrupted. "Where did the president make it clear that he wasn't happy with that chant in that moment?"

"I'm sure you've been to a Trump rally," Schlapp replied. "There's a lot of emotion, there's a lot going on. He continued with his speech. He made it very clear the next day that he was not happy with the chant."

Schlapp then deflected criticism to four Democratic congresswomen who Trump has told to "go back" to where they came from.

"The chants of anti-American, anti-Semitic chants that they push forward," she said of the four Democratic congresswomen of color.

"Does that justify saying, 'Send her back?'" the ABC host asked.

Stephanopoulos noted that Trump recently retweeted a comment suggesting that "send her back" is his replacement chant for "lock her up," which was used in the 2016 campaign against Hillary Clinton.

"Look, he made it very clear that he disagreed with the chant," Schlapp opined. "And I will tell you he stands with those people in North Carolina, across the country who support him. And why? Because they love America. They know that the president is fighting for them every day."

Schlapp did not immediately explain how the president could both "stand with" and "disagree with" his supporters who chanted "send her back."