Shocking video: White man attacks black woman after traffic accident -- then pulls a gun on her and bystanders 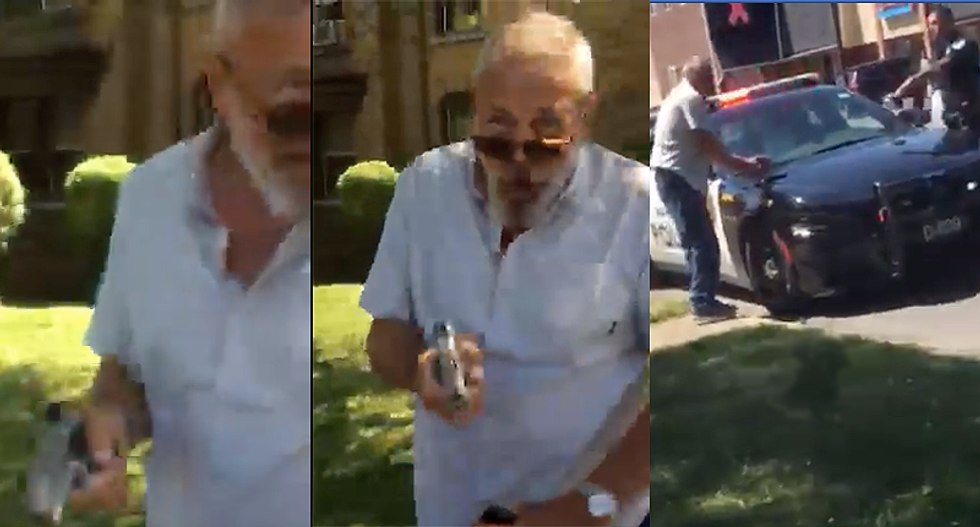 A Lockport, New York man has been charged with throwing an African-American Muslim woman to the ground before drawing his gun and pointing it at her and others.

According to WBFO, Jeffrey Calhoun is being charged with attempted robbery in the first degree, menacing in the second degree and harassment in the second degree after the incident occurred during a small traffic incident. The entire encounter was captured on a cell phone video showing Calhoun fly into a rage.

"While he was sitting in the car, he looked at me and said, you n***er, 'You probably didn't even have insurance,' and I said, 'Oh be quiet,'" recalled victim Jeanneie Muhammad. "So we're going back (and forth) like this the police officer said, 'Ma'am you can't have this exchange.' And he walked me down the street."

The video shows Calhoun refusing to let go of Muhammad's handbag as she tried to leave. Presumably, that's where the attempted robbery charge came from.

Muhammad and other African-American leaders in the region don't think the charges go far enough. They want prosecutors to classify the attack as a hate crime.

County District Attorney John Flynn said he's investigating whether it falls under the requirements needed to classify it as a hate crime.

"There's video out there which is good for me in the sense that I have a visual video to ask what happened at a certain period of time," Flynn said in an interview. "So I review the video, I'm getting statements. I'm talking to the officers. I'm talking to the people that were there to get a full picture."

"I can ensure the victim, her husband and the community that I will prosecute this manner to the fullest extent with the evidence that I have, that I can prove in the court of law," he promised.

The incident was captured by Precious Santiaga, who was on her front porch at the time.

"I thought she was a shoplifter. I saw the man's gun. I thought he was a security guard trying to stop her. That turned out not to be the case," Santiaga said.

She can be heard yelling at Calhoun on video saying to stop, and she would call the police. She said she even saw him bite Muhammad.

Once police arrived Santiaga shouted that Calhoun had a gun. Calhoun was walking toward the police car when the officer got out. Once he heard that the man had a gun, the officer drew his weapon and told Calhoun to put his hands on the hood of the police car. Another police car quickly arrived and held Santiaga and Muhammad back from the scene.

Muhammad explained that thanks to Santiaga, the situation calmed down.

You can watch the shocking video below: