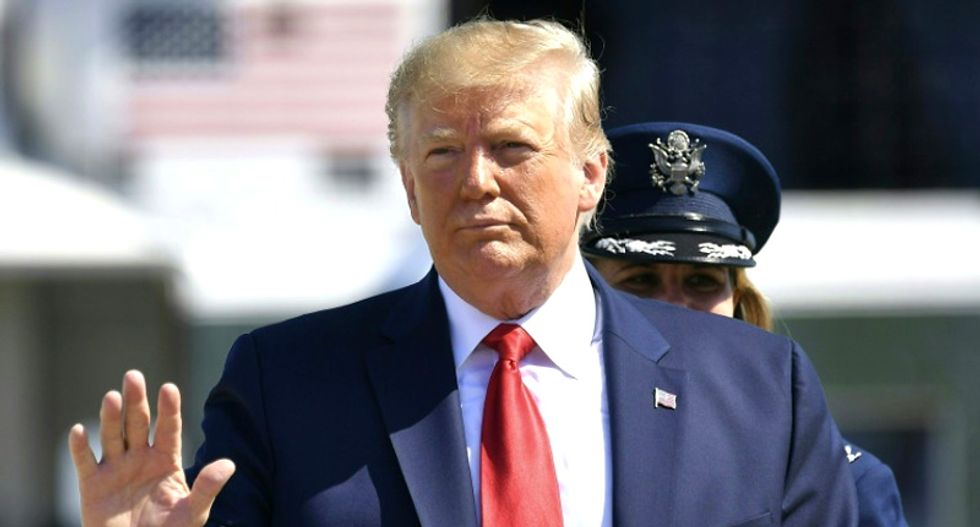 On Wednesday, President Donald Trump continued to attack the young congresswomen of color nicknamed "The Squad," after he was criticized for saying the women should go back to their own countries, even though all four are U.S. citizens. Now, he's doubling down.

On Twitter Wednesday he called the women "left-wing cranks." He added that they were free to leave if they don't like America.

Lee is a forensic psychiatrist and an expert on violence at Yale School of Medicine. She helped launch a public health approach to global violence prevention as a consultant to the World Health Organization and other United Nations bodies since 2002. She is author of the textbook, “Violence: An Interdisciplinary Approach to Causes, Consequences, and Cures,” president of the World Mental Health Coalition, and editor of the New York Times bestseller, “The Dangerous Case of Donald Trump: 37 Psychiatrists and Mental Health Experts Assess a President.”

She and her coauthors recently prepared a mental health analysis of the Mueller report with recommendations. On July 23, 2019, they will present their analysis at a town hall-style meeting on Capitol Hill as well as unveil five questions they would like to ask Special Counsel Robert Mueller (for more information, visit: dangerouscase.org).

Raw Story: Donald Trump told “Progressive Democrat Congresswomen” to go back to the countries they came from. When they rebutted, he doubled down, accusing them of spewing “foul language & racist hatred.” What do you make of these comments?

Bandy X. Lee: The first thing this indicates to me is that the president is deteriorating rapidly. He attacks as a maladaptive means of coping with stress, and he won’t stop. Given the rigidity of his repertoire, we can expect more, escalating attacks.

Secondly, his racism also lays bare his dangerousness. If the actual content of Robert Mueller’s report were to be understood properly, rather than in the light of distortion and deflection the Attorney General generated to protect him, or the “No collusion! No obstruction!” hypnotism he has managed so far, things could become uncontrollable. We should not wait to see what happens.

Beyond the immediate risks, there is also widespread danger. There is a saying, “Sticks and stones may break bones, but words kill.” There are plenty of historical examples as well as research to support that this is true.

Dr. Kevin Washington, who specializes in African and African-American cultural psychology, calls racism a societal disorder. The president, through his powerful public position, is worsening this societal disorder. And since structural violence is the deadliest form of violence, causing more deaths per year than all the murders, suicides, wars, and massacres around the world combined, and racism is a form of structural violence, he is committing the worst violence of all through his words.

I wrote a textbook that illustrates how all forms of violence, including verbal aggression, sexual assaults, human rights abuses—such as the cruelty against migrant children—nuclear violence, and climate violence are all interrelated. I wrote it in 2014, with some updates just before publication, but I did not expect it all to play out in one presidency.

Raw Story: Will you be discussing this at your online town hall?

Lee: We will address the president’s lack of mental capacity, which is no longer a long-distance assessment, thanks to the Mueller report. We had to postpone our town hall to July 23, 2019, in order to fall just before Mr. Mueller’s testimony. We are doing this to maximize public attention on an issue all other authorities have suppressed, including the press. Details will be on our web site, dangerouscase.org.

Unfortunately, his limited testimony will come two days before the U.S. Congress goes into summer recess for six weeks, and the containment we urgently need will be delayed yet again. Stalling and obstructing, so that the natural time course of the 2020 presidential campaign will eliminate time for an impeachment inquiry, are consistent with the resistance against examination and treatment we see in mentally impaired individuals. The contributions of mental impairment are important, since they will be far more overpowering than criminality alone.

Raw Story: How will you have these mental health contributions be known? It seems we continue to fail to recognize them.

Lee: Not only that, the resistance will grow worse, the more severe the situation is. Mental health experts need to become part of the discussion, if only to reassure that there are ways of managing this. Without experts, even if the signs of disorder are obvious, it becomes a mere insult, since there is no scientific basis and no one will know what to do about it. If they are not obvious, it becomes a potential hazard to those exposed, which in the case of a U.S. president is the nation and the world. Most mental disorders cause suffering on the afflicted person and violence against the self, but there is a small subset that inflicts suffering on and violence against others. It should be no secret in which category the president’s impairments fall. It is very easy to underestimate the depth and complexity of this form of dangerousness without expert input.

Crucially, most people will be tempted, cajoled, confused, and pressured into enabling or colluding with the disease. This is how loved ones become accomplices in repeatedly recreating the trauma of traumatized individuals, unless treated. This is how ordinary people readily trust those with predatory drives, allowing perpetrators to repeat their acts again and again, unless stopped. Unfortunately, this is also how the public is more likely to give to a disordered leader frenzied, irrational support that is impermeable even to facts and self-interest. Dr. Judith Herman and I have outlined how there is great temptation to ally with power when the power becomes abusive and unhealthy.

Another popular misconception is that general mental defect exonerates from criminal responsibility. Political people may misapply this mistaken notion by trying to explain away wrongdoing or by believing that avoiding the topic will facilitate maximal punishment. The truth is, one can suffer from a severe mental illness and still be criminally responsible, while the determination of not guilty by reason of insanity is very specific and rare.

To see these signs and not to speak up, in my view, violates the heart of medical ethics. We are health professionals and not political players, and we are calling out the political nature of the American Psychiatric Association’s distortion of professional ethics, much like what I observe in the attorney general’s actions in relation to the law.

Medical guidelines should be clear: when lives and safety are at stake, there is not just permission but an obligation to act. If we have a duty to warn and protect non-patients or the public when it is in danger, and this has been litigated over a hundred times, then certainly the guideline not to diagnose a public figure without consent, which was litigated once 55 years ago, is subordinate to it. The former is a law adopted by most U.S. states and many nations. The latter is a rule that only one among many mental health organizations can enforce but can never become law because of its conflicts with the First Amendment. We are trying to expose this fact, in addition to speaking up, as our responsibility to public health.