'You had the Nobel Prize?' Trump learns of Yazidi activist Murad 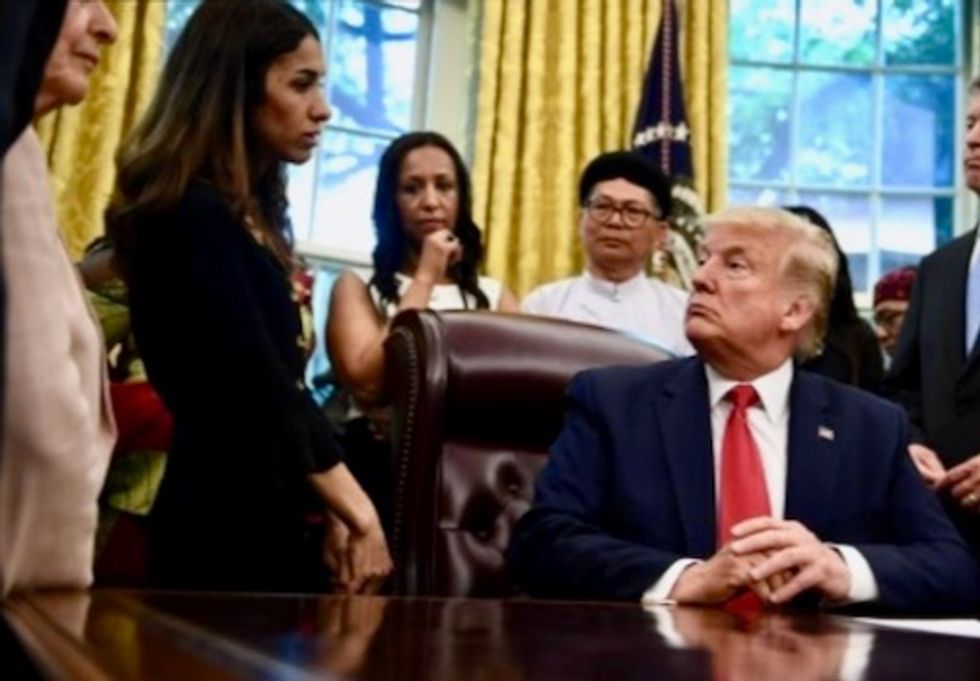 US President Donald Trump on Wednesday appeared unfamiliar with the work and cause of Nobel laureate Nadia Murad as she pleaded with him to help the Yazidis of Iraq.

Murad, one of thousands of women and girls from the ancient faith abducted by the Islamic State group as they overran swathes of Iraq in 2014, joined a group of survivors of religious persecution who met Trump in the Oval Office on the sidelines of a major meeting at the State Department.

After Murad explained how her mother and six brothers were killed and that 3,000 Yazidis remained missing, Trump said, "And you had the Nobel Prize? That's incredible. They gave it to you for what reason?"

"After all this happened to me, I didn't give up. I make it clear to everyone that ISIS raped thousands of Yazidi women," she said, referring to the Islamic State group.

"Please do something. It's not about one family," she said.

Trump, who has boasted of crushing the self-styled caliphate of the Islamic State group that once stretched across Iraq and Syria, also appeared at a loss when Murad asked him to press the Iraqi and Kurdish governments to create safe conditions for the Yazidis to return.

"But ISIS is gone and now it's Kurdish and who?" Trump asked, before later telling her, "I know the area very well."

Murad also explained how Yazidis took dangerous routes to find safety in Germany, whose welcome to refugees has been vocally criticized by Trump.

The US leader also appeared unfamiliar when he met a representative from the Rohingya, a Muslim minority targeted in a brutal campaign two years ago in Myanmar.

One day earlier, his administration banned travel to the United States by Myanmar's army chief and three other senior officers, calling the violence "ethnic cleansing."

The Trump administration frequently speaks of promoting religious freedom, a key issue for much of his evangelical Christian base.

Government ministers and representatives of persecuted groups are spending three days at the State Department for a meeting on religious freedom, which Vice President Mike Pence will address on Thursday.