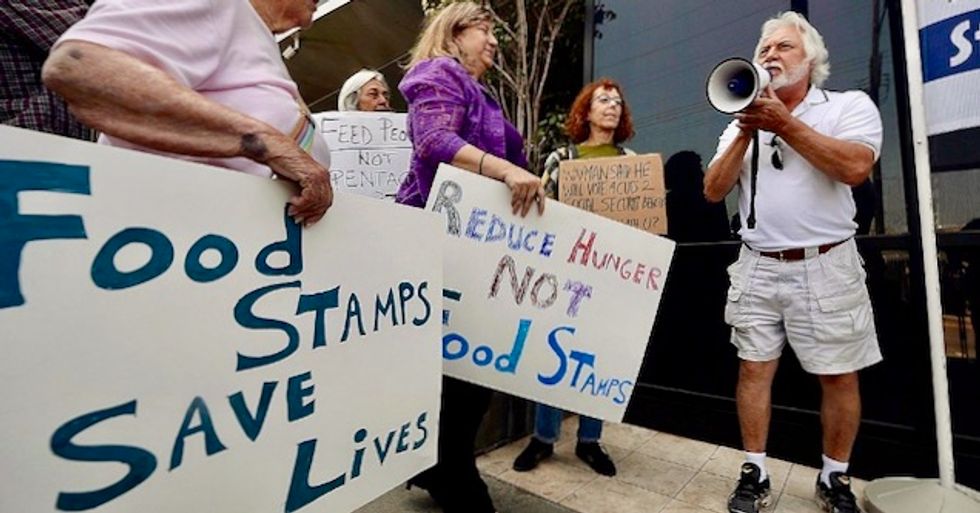 "Executive action should not be used to hurt individuals, families, and communities."

In a letter Wednesday to the U.S. Department of Agriculture, mayors from 70 cities across the country expressed their "strong opposition" to the Trump administration's proposed federal rule that could cut off food stamps for more than 3 million people.

USDA Secretary Sonny Purdue announced the rule, which would end automatic Supplemental Nutrition Assistance Program (SNAP) eligibility for those who receive other federal and state aid, last month. Critics swiftly condemned the proposal as an "unconscionable" attack on low-income Americans that would increase hunger among the most vulnerable.

Written on behalf of the U.S. Conference of Mayors (USCM) the new letter (pdf) describes SNAP as "one of our nation's key resources in the fight against hunger and... particularly important to vulnerable populations in our cities."

The letter highlights the proposal's anticipated consequences that have dozens of mayors so concerned:

As noted in the proposal's regulatory analysis, this far reaching executive action will escalate food insecurity and hunger for an estimated 3.1 million individuals—including children, seniors, and people with disabilities in our states, regions, and cities nationwide. Furthermore, this proposal will put children's health and development at risk by removing their access to healthy school meals; and harm our economy by reducing the amount of SNAP dollars available to spur regional and local economic activity.

As mayors, we serve as the CEOs of the nation's cities; and remain most concerned about any proposal that will reduce improvements to the health of our residents, weaken nutrition programs, deteriorate advances to healthy food access, and spur declines in local and regional economies.

The mayors emphasize research that has shown that SNAP has lifted millions of people out of poverty, improved health and education outcomes, and boosted local economies.

"Executive action should not be used to hurt individuals, families, and communities; and we urge you to abandon this proposal," the letter concludes. "Our nation cannot remain globally competitive if our children do not have enough to eat; if our citizens do not have access to affordable healthcare; if housing and other basic needs are priced out of reach; and if adults who are willing and able to work cannot find jobs that will help them support their families."

The mayors who signed on to the letter include Mayors Bill de Blasio of New York City; Eric Garcetti of Los Angeles; Jim Kenney of Philadelphia; Martin Walsh of Boston; Muriel Bowser of Washington, D.C.; Pete Buttigieg of South Bend, Indiana; and Sylvester Turner of Houston. Buttigieg and de Blasio are also candidates in the 2020 Democratic presidential primary.

Mayor Steve Adler of Austin, Texas also signed the letter. He told Axios, "I am opposed to any action by the White House to take away nutrition assistance from millions of our most vulnerable—including children, the disabled, and seniors—and that is exactly what this proposal to limit SNAP has the potential to do."