A fist raised and a knee taken: US gold medalists Gwen Berry and Race Imboden protest trump racism and gun violence Epidemic at Pan Am Games 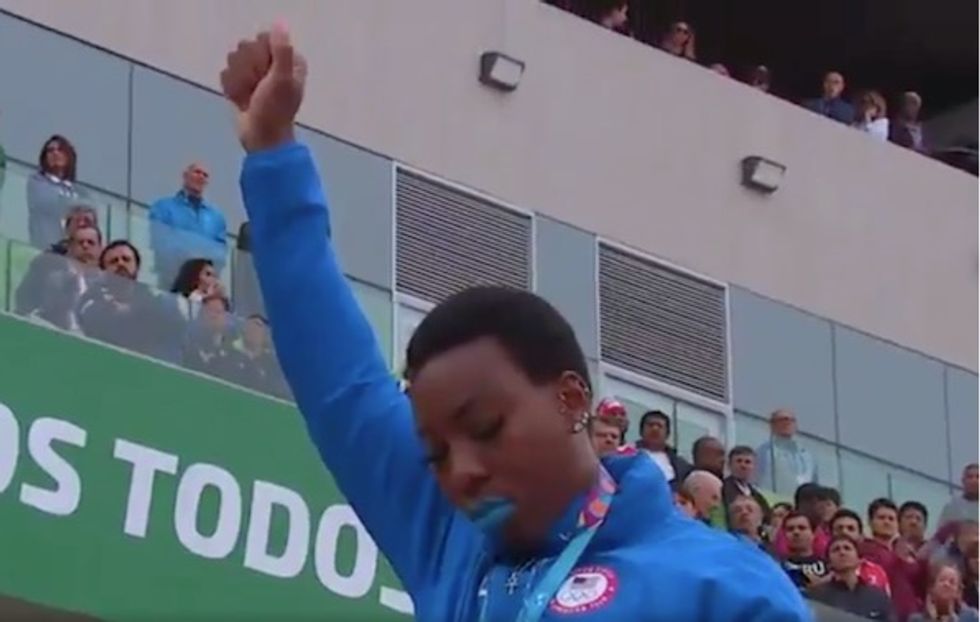 Drawing global praise for taking symbolic stands against injustice and violence, a Gold Medalist hammer thrower as well as  a member of the Gold Medal-winning men's U.S. Fencing Team—as other politically-engaged athletes have done in the past—staged individual protests during ceremonies at the Pan Am Games over recent days to call attention to their country's racism, mistreatment of immigrants, and ongoing gun violence epidemic.

"We must call for change," tweeted 26-year-old Race Imboden on social media as he shared images of his protest which took place Friday at the internatioal games in Lima, Peru.

We must call for change. This week I am honored to represent Team USA at the Pan Am Games, taking home Gold and Br… https://t.co/4VhULaqWUs
— Race Imboden (@Race Imboden)1565397674.0

"A president who spreads hate are at the top of a long list" of the nation's woes, Imboden explainedin a subsequent tweet.  "I chose to sacrifice my moment today at the top of the podium to call attention to issues that I believe need to be addressed. I encourage others to please use your platforms for empowerment and change."

Imboden wasn't alone in protest at the games as his protest on Friday was followed Saturday by hammer thrower Gwen Berry, who raised her fist in protest on the podium as the Star Spangled Banner played following her Gold Medal win:

The life of an Olympic athlete is one of endless sacrifice.

For hammer thrower Gwen Berry and fencer Race Imboden, their principles won't be among them.

Berry and Imboden are almost sure to be disciplined for their protests on the medals stand at the Pan American Games. Berry raised her fist during the Star-Spangled Banner after winning gold Saturday, one day after Imboden took a knee during the men's team foil medals ceremony.

While the United States Olympic & Paralympic Committee said Saturday it was "disappointed" Imboden had broken a pledge the U.S. team athletes take concerning political demonstrations—warning that "consequences may result"—many people who shared his and Berry's concerns about the current political situation in the U.S. thanked them for their high-profile demonstrations.

Despite the predictable backlash from right-wingers who accused both Imboden and Berry of being insufficiently patriotic, Armour argues such sentiments clearly miss the point.

"We praise athletes from foreign countries for their courage when they protest against their broken and corrupt governments," she wrote. "Is the America of 2019 so much different?