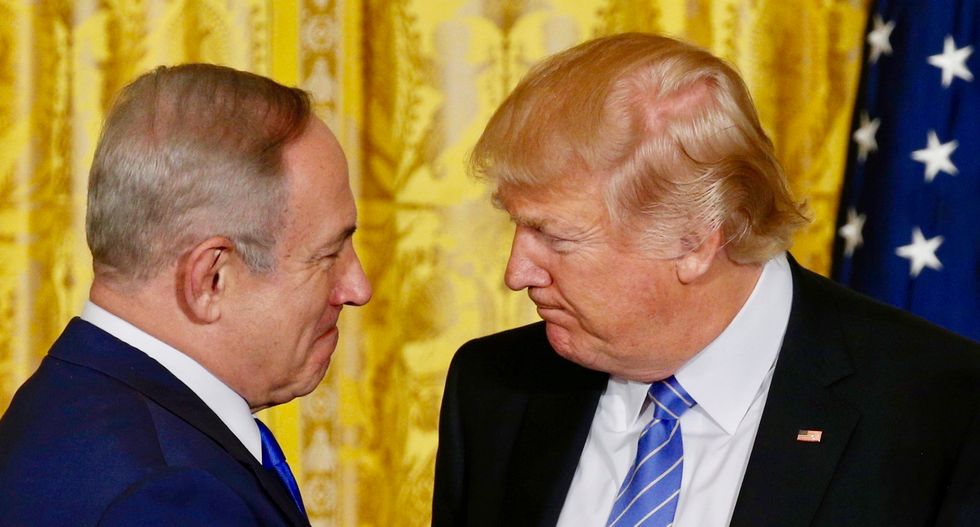 "Another new low as this country abandons all but the pretenses of democracy."

The government of Israel is reportedly planning to announce it will bar Reps. Rashida Tlaib and Ilhan Omar from entering the country, it was revealed Thursday, after weeks of speculation that Prime Minister Benjamin Netanyahu would ban the pair from Israel and, by proxy, the Occupied Territories.

"This is authoritarian behavior," journalist Rania Khalek said of Israel's decision in a tweet.

The news was reported Thursday morning in a tweet by Israeli news channel Mako after days of news articles speculating that the Netanyahu government was considering such a move.

Israeli news outlet i24 News also reported that the Netanyahu government was prepared to announce the two congresswomen were banned from the country:

The decision, made by Minister Aryeh Deri, has not been released to the public but is expected soon.

As final deliberations on the matter are currently making its way through the Interior Ministry, U.S. President Donald Trump took to Twitter to encourage the Israeli government not to back down.

"Banning U.S. Congress members is yet another new low as this country abandons all but the pretenses of democracy," tweeted journalist Glenn Greenwald, noting the decision was made in part due to the urging of President Donald Trump.

Israel has been banning critics, including Jewish ones, from entering Israel (& the West Bank) for years. Banning U… https://t.co/KFUWMrRz5Q
— Glenn Greenwald (@Glenn Greenwald)1565869000.0

The decision exposed the true face of the occupation, tweeted Ayman Odeh, a prominent Israeli-Arab politician.

"Israel has always banned Palestinians from their land and separated us from other Palestinians, but this time the Palestinian is a U.S. congresswomen," said Odeh. "Rashida Tlaib didn't even have to land to expose the true face of Israel's occupation."

Tlaib and Omar planned to visit Palestine Saturday as part of a delegation to the occupied region organized by Tlaib, a Michigan Democrat, as an alternative to the AIPAC-funded tour of Israel led by Rep. Steny Hoyer (D-Md.) that wrapped earlier this month. Hoyer, according to Washington Post reporter John Hudson, "has been running point for the Democrats in urging the Israelis to reconsider the decision to block Omar and Tlaib."

House Majority Leader Steny Hoyer has been running point for the Democrats in urging the Israelis to reconsider the… https://t.co/UoIXPgCRyM
— John Hudson (@John Hudson)1565850202.0

The reason for Hoyer's activism, said Hudson, is simple: barring Tlaib and Omar, the latter a Democrat from Minnesota, sends a message that's antithetical to the popular perception of Israel amongst Democratic leaders.

"Some in the Democratic leadership believe blocking Omar and Tlaib is a bad idea," Hudson tweeted before Thursday's decision was made public, "because such moves are not emblematic of a country that touts itself as the Middle East's sole democracy, a place tolerant of political expression and criticism."

More than anything, Israeli-American journalist Mairav Zonszein said on Twitter, the decision shows that Israel views the two politicians as the sum of their identities before respecting their office.

"It only makes sense that ⁦Rashida Tlaib⁩ and ⁦Ilhan Omar⁩ are subject to Israeli occupation treatment," said Zonszein. "When they visit, they are not U.S. congresswomen first and foremost, but Muslims, and with a political position."