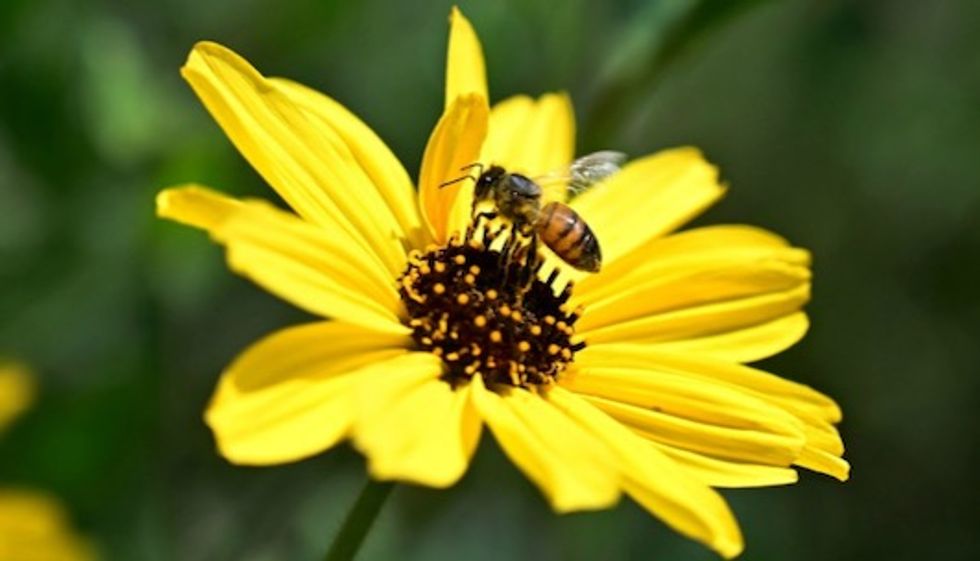 A bee lands on a wild sunflower along the Eaton Canyon Trail in Pasadena, California on March 29, 2019. (Photo: Frederic J. Brown/AFP/Getty Images)

"Insect abundance has declined 45 percent. This is a global crisis—we must ban neonics to save the bees!"

The rapid and dangerous decline of the insect population in the United States—often called an "insect apocalypse" by scientists—has largely been driven by an increase in the toxicity of U.S. agriculture caused by the use of neonicotinoid pesticides, according to a study published Tuesday in the journal PLOS One.

"We need to rapidly shift our food system away from dependence on harmful pesticides and toward organic farming methods that work with nature rather than against it."

—Kendra Klein, Friends of the Earth

The study found that American agriculture has become 48 times more toxic to insects over the past 25 years and pinned 92 percent of the toxicity increase on neonicotinoids, which were banned by the European Union last year due to the threat they pose to bees and other pollinators.

Kendra Klein, Ph.D., study co-author and senior staff scientist at Friends of the Earth, said the United States must follow Europe's lead and ban the toxic pesticides before it is too late.

"It is alarming that U.S. agriculture has become so much more toxic to insect life in the past two decades," Klein said in a statement. "We need to phase out neonicotinoid pesticides to protect bees and other insects that are critical to biodiversity and the farms that feed us."

"Congress must pass the Saving America's Pollinators Act to ban neonicotinoids," Klein added. "In addition, we need to rapidly shift our food system away from dependence on harmful pesticides and toward organic farming methods that work with nature rather than against it."

According to National Geographic, neonics "are used on over 140 different agricultural crops in more than 120 countries. They attack the central nervous system of insects, causing overstimulation of their nerve cells, paralysis, and death."

With insect populations declining due to neonic use, "the numbers of insect-eating birds have plummeted in recent decades," National Geographic reported. "There's also been a widespread decline in nearly all bird species."

As Common Dreams reported in February, scientists warned in a global analysis that by decimating insect populations, widespread use of pesticides poses a serious threat to the planet's ecosystems and ultimately to the survival of humankind.

Klein said the "good news" is that neonics are not at all necessary for food production.

"We have four decades of research and evidence that agroecological farming methods can grow our food without decimating pollinators," said Klein.