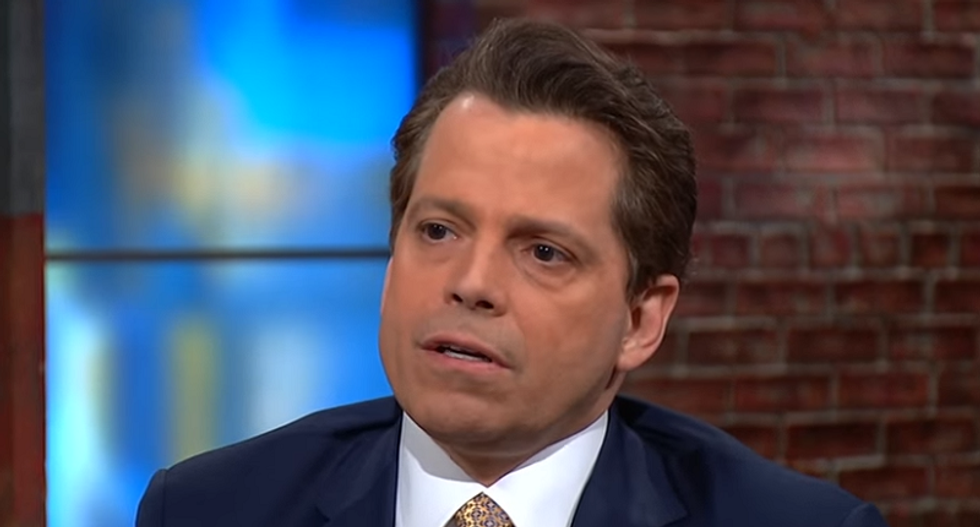 President Donald Trump spent another day attacking the former White House communications director and "the Mooch" said that he's now got "the entire GOP" coming after him on Twitter when they have more important things to do.

"If you look at the style of points, the manifestations of his tweets today, which are constantly in delirium, scaring people and one of the talking points I hear from Republicans, 'Well, it's the economy and we could be going up against a socialist so I'll hold my nose and do this,' but if he's really fully weakened the economy, I think those people will change their minds quickly," Scaramucci predicted.

He said that the way Trump talks about Federal Reserve Chairman Jerome Powell is another problem because it sounds like something out of a banana republic.

"It is a very complicated situation because we're in new territory on every different front," he continued. "The guy is attacking individual citizens. He attacked my wife this morning for no reason. He's attacking the Federal Reserve chairman. He's got the entire GOP using their Twitter feed to attack fellow Republicans like me. I mean, this is down the checklist of authoritarian behavior, and it is very disconcerting to what I call the normal group of people in the United States that are moderate Democrats and moderate Republicans, and so I'd love to see it end, and we're working on it.'

Cooper harkened back to the tweets Trump sent this morning, saying that it's "amazing" Trump is so willing to disassociate himself from everyone he ever embraced. Scaramucci said he was fine with it.

"No, come on. I had to go on the keto diet, so he didn't call me a fat slob on top of evening else," Scaramucci said. "He has a checklist of things. He didn't know me. I got fired like a dog — all this other stuff. I actually I don't care. I'm 55 years old. I have five beautiful kids. I'm really thinking about my children in this whole thing, and I have to sit down and look at the future of the United States and the level of division that he's creating."

He said that if Trump wants to try and personally attack or shame him, it isn't a bother, because he knows that Trump's entire cabinet "hates his guts and most of Congress."

"So, he's got to do that because he's very, very afraid that the dam is going to break and the insiders will say, 'Hey, no mas, we can't take it anymore' and when that happens, like I told your colleague John Berman, the wicked witch of the west, the water gets thrown, the witch melts and 'Gee, Dorothy, I'm sorry. The perceived power had me scared.' I'm telling Republicans and Americans there is absolutely no reason to be frightened. We have to come together now and call this for what it is and if we do that and we do that together, we can beat it back, and we can get a really experienced Republican candidate to go against some of the Democratic adversaries that have been declared."

He continued: "Take a look at the word salad that the president put up against me. I mean, it's very laughable. And he is doing a little projecting because I mean, I'm a lot of things. I'm not tall, and I'm not that thin, and I'm definitely not nervous, Anderson. This is a lot of projecting going on for the president."