'Archie Bunker is in the Oval Office' flailing around searching for a fight: columnist 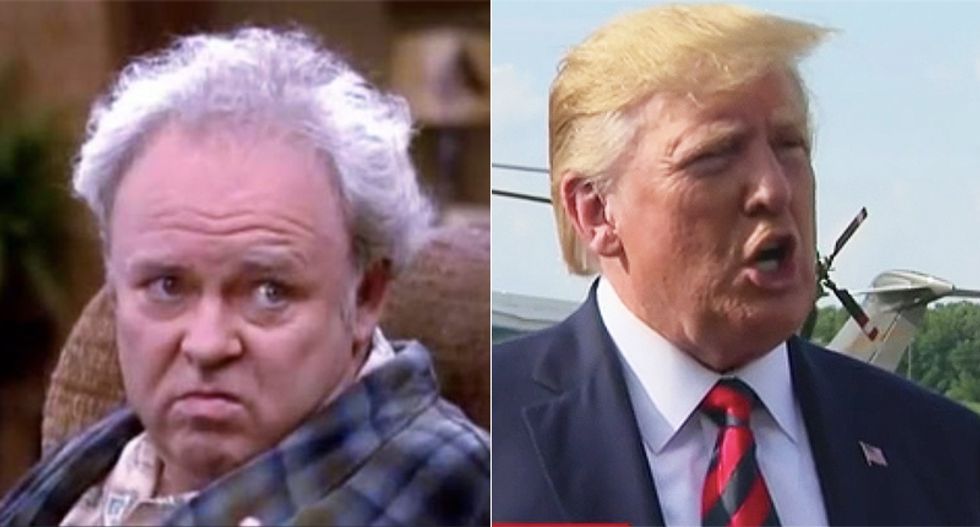 President Donald Trump's doctrine of global policy is ambiguous at best and erratic at worst, a Daily Beast reporter pointed out in a Thursday morning piece.

Thus far, the president's dogma has been a hodge-podge of assumptions and ambiguity that changes depending on the feud of choice he has waged on any given day. The only consistency is Trump's unfaltering support for Russian President Vladimir Putin and his loyalty to Benjamin Netanyahu. Outside of that, the Trump doctrine seems to be based on the ill-informed whims of a president who conducts foreign policy based on near-daily squabbles.

"It’s whatever oozes out of his brain at any given moment, and this week may already constitute the most gob-smacking series of oozes in his presidency," wrote special correspondent Michael Tomasky. He noted it's rare to see a president of the United States meltdown before the watchful eye of a horrified international community.

His idea to bring Russia back into the G8 wasn't a shock, given the president's loyalties.

"Yes, maybe the Russians shot down a commercial airliner, killing 300 people," Tomasky wrote. "And maybe they invaded a sovereign country—where they’re still at war, by the way, which they always denied perpetrating. And maybe the entire rest of the G8 agreed that Russia had to go.

But Obama did it, and if Obama did it, it has to be undone. And what better time than right after a mysterious nuclear explosion that Russia says is none of the world’s business?"

He wondered what Putin must be thinking as Trump so eagerly goes to battle for a country he doesn't even represent.

"Do you think this murderer and kleptocrat and enemy of democracy ever dared to imagine that the president of the United States of America would be his biggest idiot apologist?" Tomasky wondered. "He and his cronies must sit around the Kremlin laughing about it every day."

He noted that Trump doesn't even know the history of Russia and Afghanistan, much less studied the nuances of the U.S.'s involvement.

"If Trump has ever heard the words 'perestroika' and 'glasnost,' he probably thinks they have something to do with Moscow models urinating," Tomasky wondered.

Then the president decided to issue a verbal pre-emptive strike against Denmark after the prime minister dared to tell him that he couldn't take over Greenland like some kind of absent-minded conquistador. It's unclear if the president even knows where Denmark is and Tomasky urged Trump to check out a map.

"So Trump accidentally looked in its direction one day and noticed: Man, that Greenland is huge! And look at all that coastline! I can build 20, 50, 100 beautiful links courses!" Tomasky joked. "And they must have tons of fossil fuels we can burn! Mick, who owns Greenland? Denmark? You’re kidding, right? Get me the head Denmarkian on the phone, please. What? It’s a woman? And hey, she’s kinda hot, for a prime minister! This’ll be easy."

Then there's the Kashmir flub. The conflict between India and Pakistan began the year after Trump was born, so he believes he's an expert.

"A lot has to do with religion," Trump said, perfectly encapsulating his global political doctrine.

"And he offered to mediate. God help Kashmir," Tomasky wrote.

All of this was external from Trump's bizarre dispute with American Jews, who continue to support Democrats overwhelmingly more than Republicans.

"Anti-Semitism has always been more complicated than racism because anti-Semites sometimes have a certain kind of perverse respect for Jews," explained Tomasky. "Remember that episode of 'All in the Family' where Archie Bunker needed a lawyer? 'Edith,' he bellowed, 'find me a lawyer—and make sure it’s a Jew!' It’s exactly the same thing as Trump saying in that speech to Jewish Republicans in 2015, 'I’m a negotiator like you folks, you folks are negotiators.' Archie Bunker is in the Oval Office."

Meanwhile, Tomasky continued, ISIS is regaining its power, North Korea is making small nuclear weapons, Iran decided they can be just as "unpredictable" as Trump, Italy just kicked out their prime minister and a new one could be any level of fascist and Putin is still hacking America.

"The only people who like and admire the United States anymore are the world’s worst dictators—Putin, Orban, Duterte, al-Sisi, Erdogan, Salvini, and so on. Oh, and BoJo, who’s not a dictator but is arguably a bigger liar than even Trump. The rest of the world gazes upon the 'chosen one' and laughs, shakes it head in disbelief, and cries," Tomasky closed.

And that, unfortunately, is the Trump doctrine.