'Are you from this country?' Angry woman caught threatening to pepper spray man over unleashed dog 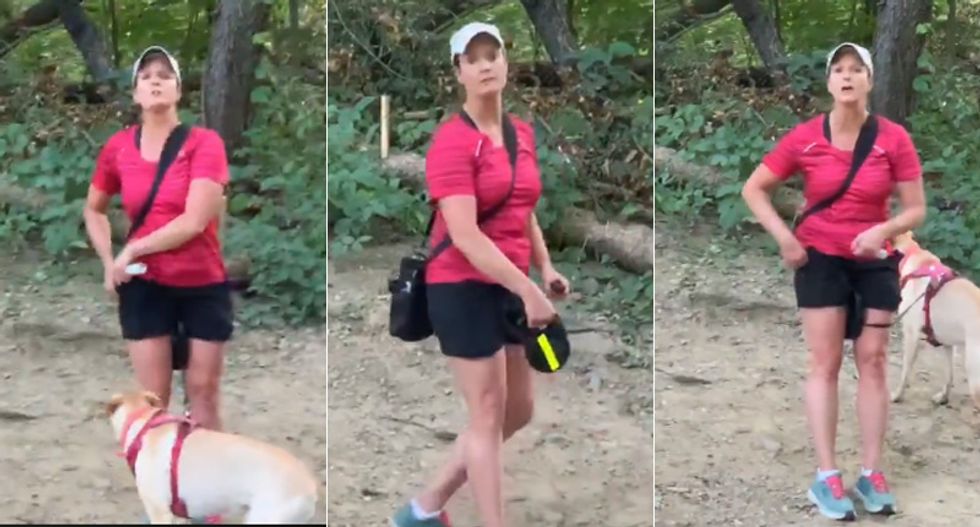 A man walking his dog near a Massachusetts pond was confronted by a woman when she got mad that he didn't have his small dog on a leash. Mohamed, as he asked to be identified, started filming the incident as the woman's taunts swiftly devolved into racism, reports Patch.

"Oh, that's what this is about," says Mohamed.

"You seem to be completely ignorant of any law here," she says.

She then warned him that he had better have his own paperwork. She threatened to pepper spray him.

Mohamed called the police about her threat. They told him to walk away from the encounter.

He posted his story about the encounter to Facebook, where it was greeted with positive responses.

"I've been to this particular pond in Olmsted many times, and it's pretty standard for owners to take their dogs off leash for a swim here," one woman wrote in response.

"I've seen it dozens of times. And if this lady has been there much at all, she's seen it before too. My guess is that this wasn't about an off-leash dog at all. It was about who was with that dog. Also, even if Mohamed's dog were completely running amuck in an area where off-leash dogs were not the norm, the blatant racism and xenophobia here is absolutely unacceptable," she added.

Others noted that he should leash his dog. Nevertheless, there was absolutely no reason for the woman to been racist about it.

"Comments like this are perfect example that we are not in a race-neutral place right now, and it's up to us to take the action that we can to make sure folks of color are comfortable living in and even passing through our town," a commenter wrote.