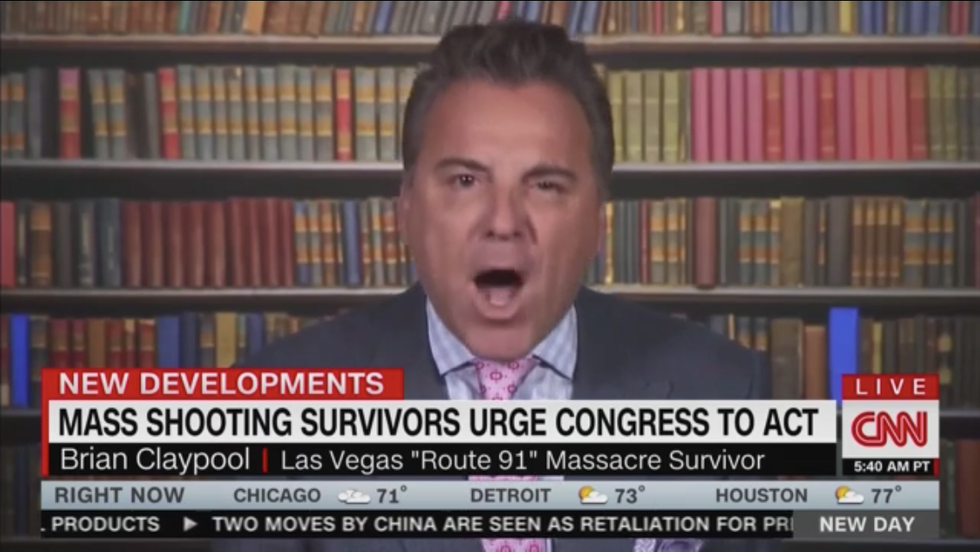 On Tuesday's edition of CNN's "New Day," Brian Claypool, a survivor of the Las Vegas massacre, exploded with rage at Republicans for refusing to protect innocent lives.

"We just had a Republican member of Congress on, he said 'I’m open to discussing these things but let’s not just say it’s the gun, let’s deal with the other parts,'" said anchor Chris Cuomo. "This has become a zero-sum thing where each side believes they have to get more than they give. And so we go nowhere."

"Yeah, Chris, I was really offended by that congressman’s remark," said Claypool. "I’m emotional as we speak. It has everything to do with these assault weapons being used. It’s not the human being. The human being can’t go kill people, can’t go shoot up the streets of Dayton, can’t go shoot up the Wal-Mart at El Paso, can’t shoot up Parkland, can’t shoot up Las Vegas without these assault weapons."

"This human carnage across our country stems from a selfish Republican Party," said Claypool. "This has everything to do with promoting political careers at the expense of public safety. Make no mistake about it. We need an assault rifle ban. There’s no question about that. And I’m pleading with people across the country, start voting these Republicans out who keep making excuses."

"We have a president who said after the El Paso shooting, he said, Chris, the following. 'Let me send some resources to El Paso. We'll send you all the resources you need,'" said Claypool, his voice rising to a shout. "What are you planning on sending? Body bags? And Band-Aids? Instead of an assault weapon ban? It’s pathetic, Chris!"