Beto O’Rourke says El Paso shooter did exactly what Trump wanted: ‘No one should be surprised’ 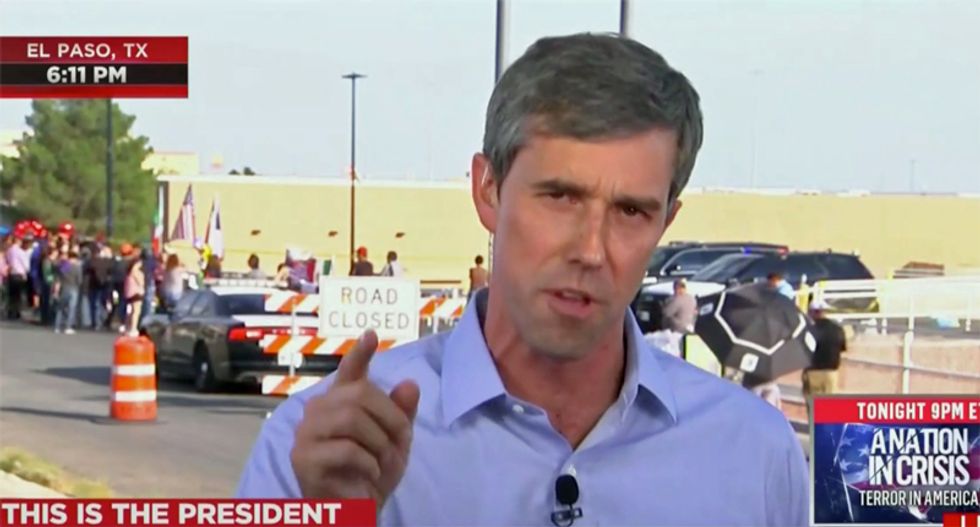 O'Rourke, who is seeking the 2020 Democratic Party presidential nomination, was interviewed Monday by MSNBC's Chris Hayes.

O'Rourke ripped Trump, saying that, "it is that hatred in which the president traffics, the racism that he promotes, the violence that he encourages."

"It’s very clear in this president’s maiden speech as a candidate for the highest office in the land. He chose to talk about communities like mine, to describe Mexican immigrants as rapists and criminals," he reminded.

"He did not only welcome violence against them, he literally sent U.S. service members -- thousands of them -- to the border. For what reason? To meet kids who had just fled 2,000 miles for their lives," he explained. "Who show up here penniless, defenseless, as vulnerable as a human being can be."

"He wanted that killer to be afraid and then to act on that fear. And you know what? He did," O'Rourke said.

"Twenty-two people dead now in this community, a community that has been forever changed, but will not be defined by this," he said. "Because though we have borne the brunt of this racism and this hatred and this attack, this community also holds the answer. We are one of the safest cities in America because we are a city of immigrants and asylum seekers and people from the planet over who have found a home here in el Paso, and by their very presence have made us stronger and more successful and more secure than we could have ever been otherwise."

"This, this is the example that the country needs right now," O'Rourke concluded.