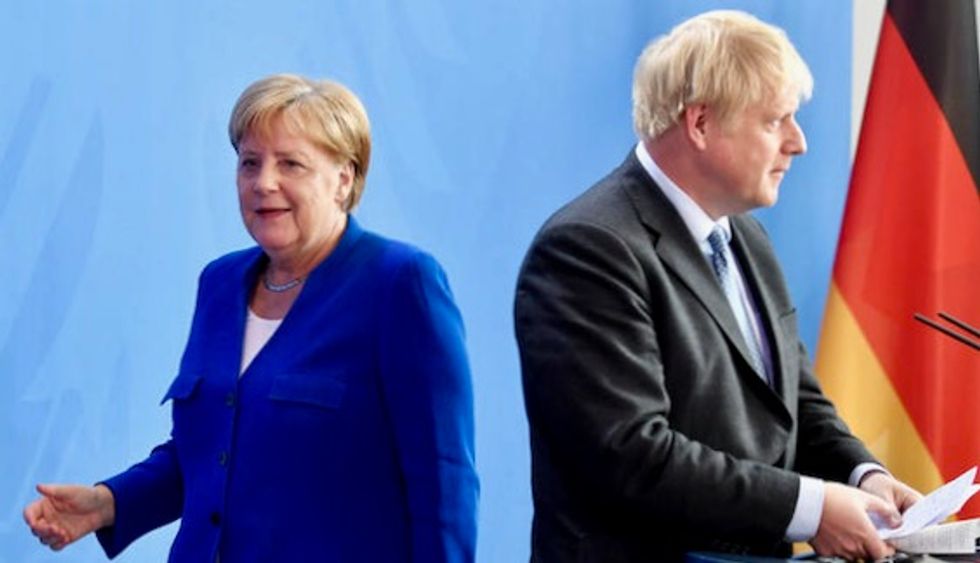 Merkel voiced hope that the European Unionmay be able to find an agreement with the UK within 30 days and resolve the Irish border backstop “hurdle”.

However, Johnson remained adamant on his visit to Berlin Wednesday that the Irish border backstop -- meaning no physical checks or infrastructure at the frontier between the Republic of Ireland and Northern Ireland -- be axed.

More than three years after the United Kingdom voted to quit the European Union, it is still unclear on what terms -- or indeed whether -- the bloc's second largest economy will leave the club it joined in 1973.

Johnson, a Brexiteer who won the premiership a month ago by an internal party vote, is betting that the threat of "no-deal" Brexit turmoil will force Merkel and French President Emmanuel Macron to back down and support his demands.

Phil Hogan, the European commissioner for agriculture, said Wednesday that Johnson was “gambling with peace” in relation to Northern Ireland. Hogan also cited Winston Churchill - one of Johnson’s heroes – saying the PM’s legacy would be, “never have so few done so much damage to so many”.

"We do need that backstop removed," Johnson said beside Merkel. "But if we can do that then I'm absolutely certain we can move forward together."

But with just over 10 weeks left until the UK’s scheduled departure from the bloc, the EU has repeatedly said it will not renegotiate the Withdrawal Agreement struck by Johnson's predecessor, Theresa May, and that it will stand behind member state Ireland. The UK’s prime minister said Wednesday the "undemocratic" Irish border backstop will “either divide the UK or lock us into the regulatory and trading arrangements of the EU... without the UK having any say on those matters."

Merkel has promised to discuss "practical solutions" to the Irish border insurance policy or "backstop" that Johnson says is unacceptable -- but she said the Withdrawal Agreement would not be reopened.

She said that the EU needed to “make an effort” to find a solution to the backstop problem before the UK is due to leave, but that the remaining 27 EU member states must also present a united front.

Ahead of his first foreign trip as prime minister, Johnson said the EU was being "a bit negative", but that a deal could be done. If not, he said, the United Kingdom would leave without one.

Johnson is due to head to Paris on Thursday with sources from the Elysee Palace sounding less positive and flexible than Berlin. A source in Macron’s administration emphasised that, contrary to what Johnson has repeatedly pledged, Britain will still have to pay an already-negotiated divorce bill of €43 bn (£39 bn, $47 bn), even if the UK leaves without a deal.

"The idea of saying 'there not a deal, so I won't pay' does not work," said the official.

A French presidential aide added that a no-deal Brexit was fast becoming the most likely scenario.